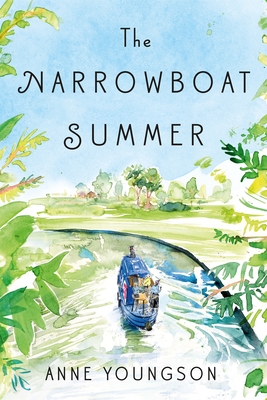 From the author of Meet Me at the Museum, a charming novel of second chances, about three women, one dog, and the narrowboat that brings them togetherEve expected Sally to come festooned with suitcases and overnight bags packed with everything she owned, but she was wrong. She arrived on foot, with a rucksack and a carrier bag. “I just walked away,” she said, climbing on to the boat. Eve knew what she meant.
Meet Eve, who has left her thirty-year career to become a Free Spirit; Sally, who has waved goodbye to her indifferent husband and two grown-up children; and Anastasia, a defiantly independent narrowboat-dweller, who is suddenly landlocked and vulnerable.
Before they quite know what they’ve done, Sally and Eve agree to drive Anastasia’s narrowboat on a journey through the canals of England, as she awaits a life-saving operation. As they glide gently – and not so gently – through the countryside, the eccentricities and challenges of narrowboat life draw them inexorably together, and a tender and unforgettable story unfolds. At summer’s end, all three women must decide whether to return to the lives they left behind, or forge a new path forward.
Candid, hilarious, and uplifting, The Narrowboat Summer is a novel of second chances, celebrating the power of friendship and new experience to change one’s life, at any age.

Instead of two roads diverging in a wood, this story begins with three roads, three women, meeting on a towpath. All of the women are at crossroads, crossroads that lead them to each other – to the complete surprise of them all.

The blurb is not quite accurate, and it’s those inaccuracies that make the story so charming.

Eve has not left her 30-year career. Her career, at least temporarily, has left her. She’s been fired. As the only woman on an otherwise entirely male engineering team, she’s been let go because she’s the easy scapegoat. She’s not one of “the boys” and somewhere along a 30-year career she’s stopped pretending. When they need a sacrificial lamb to offer up to executive management, she’s everyone else’s obvious choice. As the story begins, it’s still the morning of Eve’s unceremonial dismissal and she’s still carrying the bits and bobs from her old office as she’s making her way home.

Sally hasn’t exactly left her husband, and he isn’t exactly indifferent, but her children are grown-up and out on their own. Rather, Sally has told Duncan she will be leaving, but she hasn’t quite left yet, mostly because she hasn’t figured out what she’s going to do. Duncan isn’t so much indifferent as oblivious to anything other than his own hastily formed opinions, and Sally has stopped trying to get him to see her way. She’s been placating him for years and she’s tired of it.

Anastasia, the owner of the narrowboat Number One, which is also her home, isn’t landlocked yet, although she certainly is vulnerable. She’s seriously ill and she knows it. The doctors want her to stay in Uxbridge for several weeks, so they can do tests and see if whatever is wrong is fixable or not. But she can’t afford to moor the Number One in Uxbridge for weeks on end.

The women meet on that towpath and their needs, surprisingly for all of them intersect. Eve needs something to do while she figures out what she’s going to do. Sally needs a place to be, away from her husband and her old life, to figure out who she really wants to be. Anastasia needs help but doesn’t want to be dependent on anyone even though she, temporarily at least, has to depend on someone.

A bargain is struck between these three strangers. Eve and Sally will take the Number One to Chester and back, because a friend of Anastasia’s who repairs and maintains boats like hers is willing to put it in drydock and do a round of necessary maintenance and repairs for free if the boat can just be delivered to him.

Meanwhile, Anastasia will live in Eve’s apartment in Uxbridge, take herself to her various doctors, and see what’s what about what’s wrong.

For one strange and glorious summer, all three of them will have to become something they’re not. Eve will have to slow down and let life take her one day at a time. Sally will have to stop living for other people and live for herself – whoever that might be. And Anastasia will have to trust two strangers with her boat and trust herself to the care of a whole bunch of doctors she’d rather never see at all let alone again.

Along the way they all discover that even if they don’t have plenty of time left to them, they do have plenty of life left to enjoy. If they are willing to take what comes at the speed that the narrowboat brings it to them. 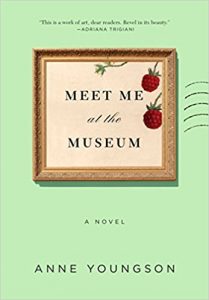 Escape Rating A-: I picked this book up because I adored the author’s debut novel, Meet Me at the Museum, and I was hoping for more of the same – but different. The same kind of charm, the same kind of slow-building but lovely and transporting story. The same idea that just because someone is past a certain age it doesn’t mean that they can’t change, or grow, or discover their best self, a new self, or both.

And I definitely got it, including the slow building of the story. This one does take a bit of time to undock and set off up the canals from Uxbridge to Chester. That’s how it should be, as the whole point of traveling by narrowboat along the canals of England is that nothing moves terribly fast until you get off.

Eve, Sally and Anastasia are all complete strangers when the story opens. They meet completely by chance, as Eve and Sally are about to pass each other on the towpath beside Anastasia’s boat, drawn there by Anastasia’s dog Noah who is inside howling like a banshee. As, it turns out, he does on a regular basis whenever he’s left alone because he’s basically a teenage drama king in a dog-suit.

There’s a part of me that wants to make puns about this chance meeting and the title, Three Women and a Boat (the UK publication title) To Say Nothing of the Dog (Connie Willis’ classic time travel story, inspired by the even more classic Jerome K. Jerome story, Three Men in a Boat which has three men floating up the Thames).

There’s certainly a bit of both classic stories in this one absolutely including the dog – although without the time travel.

But this is really about the beauty of friendship, the rediscovery of self in a story that features women who are so frequently overlooked or discarded, both in society and in fiction. Eve and Sally are both somewhere in their 50s. Anastasia is indeterminately older, considerably frailer, and determined to stave off her inevitable loss of independence as long and as fiercely as she can.

They come together out of necessity, but they bond because they come to care about each other. It takes them a while to recognize that each supplies what the others lack. Not just that Eve and Sally have the physical and economic capacity to take care of Anastasia and the narrowboat, but that they also need the narrowboat and most importantly each other to live their best life. And that’s what makes the story so beautiful.

The Narrowboat Summer is a story about second chances, a story about friendship, and definitely a story about how the second helps and supports you while you handle the first. And it is thoughtful, and lovely, and charming every step and nautical mile of its way.