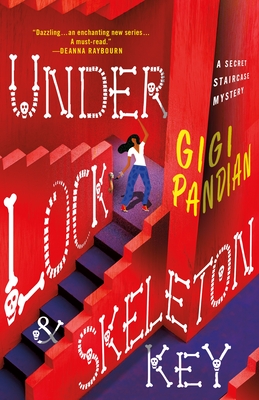 Under Lock & Skeleton Key layers architecture with mouthwatering food in an ode to classic locked-room mysteries.
An impossible crime. A family legacy. The intrigue of hidden rooms and secret staircases.
After a disastrous accident derails Tempest Raj’s career, and life, she heads back to her childhood home in California to comfort herself with her grandfather’s Indian home-cooked meals. Though she resists, every day brings her closer to the inevitable: working for her father’s company. Secret Staircase Construction specializes in bringing the magic of childhood to all by transforming clients’ homes with sliding bookcases, intricate locks, backyard treehouses, and hidden reading nooks.
When Tempest visits her dad’s latest renovation project, her former stage double is discovered dead inside a wall that’s supposedly been sealed for more than a century. Fearing she was the intended victim, it’s up to Tempest to solve this seemingly impossible crime. But as she delves further into the mystery, Tempest can’t help but wonder if the Raj family curse that’s plagued her family for generations—something she used to swear didn’t exist—has finally come for her.

Under Lock and Skeleton Key is the first book in the author’s Secret Staircase Mystery series. With that series title, it sounds like this should be a case for Nancy Drew – and it sorta/kinda is.

A grown-up Nancy Drew who grew up sharing her love of puzzle solving and misdirection with her BFF. A BFF she ghosted ten years back. A hurt they’ll both have to get over in order to get this mystery-solving partnership back together.

Tempest Raj is back home in California in her family’s eclectic, multi-ethnic and multi-family, nearly vertical piece of almost-paradise. She’s back licking her still-smarting wounds after the literal explosion of her career as a famous – and now infamous – Las Vegas stage magician. EVERYONE in the industry and on social media blames Tempest for the trick that went catastrophically wrong in both water AND fire, but Tempest is certain that the costly disaster was the result of her body-double assistant attempting to paint Tempest as a risk too dangerous to back or insure, in the hopes that said assistant could finally become the main event.

Instead the show shut down, putting everyone out of work – including said duplicitous assistant – while Tempest has been forced to retreat back home after losing her Las Vegas house along with her reputation. She’s waiting for the other shoe to drop, or should that be shoes, as it seems like everyone involved has threatened to sue her.

But her successful show wasn’t just her success, the money she earned allowed her to keep her family’s business, Secret Staircase Construction, afloat. Now that money is gone and she’s back home hoping that she won’t have to resort to taking a job that doesn’t exist as part of her dad’s somewhat misfit crew. A crew he can barely afford as it is.

When her dad calls her to report to a job site, she’s sure that fate has just come upon her. Instead, her dad needs her to look at the house they’re currently working on because they’ve found something that is more in her professional line than his. They’ve spotted a dead body in an enclosed space that no one has opened in a century – and none of them can figure out how it got there.

That kind of trap door illusion is just the sort of thing that Tempest specialized in, so she’s intrigued by the puzzle – at least until she’s chilled by the discovery that the dead body isn’t merely too recent to have been walled up for a century. When the wall is opened, Tempest recognizes the corpse just a bit too well. Her duplicitous assistant, Tempest’s near-duplicate, is dead – and the woman didn’t wrap her own corpse in a sack and put itself in a locked room.

The woman is dead. The biggest question in Tempest’s mind is whether she was killed for herself – or in place of the woman she resembled so strongly. It’s up to Tempest and her friends to figure out both whodunnit and who was intended to be done before the killer catches up with her!

Escape Rating A-: This cozy mystery thriller – as much of a contradiction in terms as that feels – is a mystery wrapped in an enigma enclosed in a puzzle in a way that is shot through with both magic and suspense. But the magic in Tempest’s life and in her family’s Anglo-Indian history is mostly of the stage magic variety.

This is also a mystery that manages to pay homage to the classics of the genre – from Agatha Christie and John Dickinson Carr to Scooby-Doo, without ever falling into the trap of slavish imitation – no matter how many hidden switches and actual trap doors the story has built into it.

But this is not a fair play mystery, unlike so many of those classics. It’s a mystery of misdirection, both for Tempest AND for the reader. It’s also the story of how Tempest gets her own “Scooby gang” together to help her solve the mystery.

A mystery that manages to contain so many red herrings that it’s a surprise that her grandfather – an excellent cook whose lovingly described dishes are guaranteed to make the reader’s mouth water – doesn’t take the opportunity to cook them up into something delicious. (His recipes at the end of the book all sound scrumptious!)

The initial crime seems impossible – a locked room mystery that would tax Holmes’ famous logic and Poirot’s little grey cells at the same time. But the rules about locked room mysteries point the way to possibilities that make the impossible not quite so impossible. Tempest just needs to color-code those red herrings.

But the story is also hedged around with family fears and family secrets. Everyone seems to be protecting Tempest – and themselves – from a truth that no one wants to talk about. There might be a curse on their family going all the way back to their roots in India under the Raj.

And it all might be just another one of those tasty red herrings. 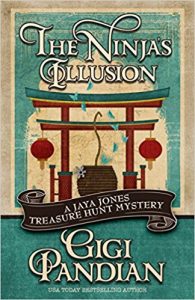 It’s only once Tempest is able to pull a tiny thread of one of the many tangled threads in this case – in the Locked Room Library no less! – that she is finally able to tease out a solution. Not just to this convoluted case – but to the question that has been plaguing her since the day she came home. The question about what’s next for Tempest. And in working towards a resolution to the mystery, she finally finds her answer.

Tempest’s answer means that this is the beginning of what looks like it will be a fun and fascinating series – one that I am very much looking forward to exploring. In the meantime, I’ll just have to go back to some of this author’s other cozily magical mystery series. I’ve already read a bit of her Jaya Jones Treasure Hunt series (The Ninja’s Illusion) and now I have the perfect excuse to go back!

3 thoughts on “Review: Under Lock and Skeleton Key by Gigi Pandian”