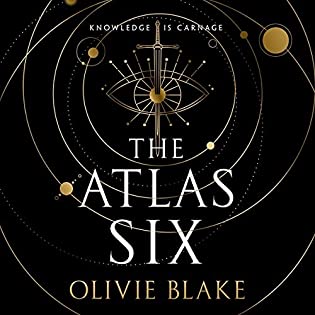 The Alexandrian Society is a secret society of magical academicians, the best in the world. Their members are caretakers of lost knowledge from the greatest civilizations of antiquity. And those who earn a place among their number will secure a life of wealth, power, and prestige beyond their wildest dreams. Each decade, the world’s six most uniquely talented magicians are selected for initiation – and here are the chosen few...

- Libby Rhodes and Nicolás Ferrer de Varona: inseparable enemies, cosmologists who can control matter with their minds.
- Reina Mori: a naturalist who can speak the language of life itself.
- Parisa Kamali: a mind reader whose powers of seduction are unmatched.
- Tristan Caine: the son of a crime kingpin who can see the secrets of the universe.
- Callum Nova: an insanely rich pretty boy who could bring about the end of the world. He need only ask.

When the candidates are recruited by the mysterious Atlas Blakely, they are told they must spend one year together to qualify for initiation. During this time, they will be permitted access to the Society’s archives and judged on their contributions to arcane areas of knowledge. Five, they are told, will be initiated. One will be eliminated. If they can prove themselves to be the best, they will survive. Most of them.

This dive into the inner workings of a very dark academia begins with Atlas Blakely, Caretaker of the Alexandrian Society, visiting the six most powerful mages of their generation and making each of them an offer that they can refuse – although he knows that none of them will.

It’s the opportunity of a lifetime and they all know it. Even if, at the beginning, they don’t realize that it will absolutely be the end of at least one of theirs.

In this alternate version of our world, magic has taken the place of science, and is treated, studied, and advanced much as science is in the world we know. Magic has created the equivalent, if not the better, of the technologies that power our world. Magic is known, it is respected, and it is feared.

Magic is power every bit as much, if in a somewhat different way, as power is magic.

Those six powerful mages are being recruited to join the Alexandrian Society, the secret inheritors of the knowledge and power that was once held in and by the Great Library of Alexandria. Membership in the Society confers prestige, which, on top of their already considerable magical power, is certain to bring them wealth and yet more earthly power as well.

But for every action there is an equal and opposite reaction. For every powerful and secret society, there is at least one, if not two or six, rivals searching for a way to take that power and add it to their own.

The six mages who have been recruited by Atlas Blakely have one year to suss out all the secrets held by the Society, by its enigmatic caretaker, and by each other. It’s not enough time to even scratch the surface of that labyrinth.

But it’s all that one of them has left.

Escape Rating B: I have extremely mixed feelings about The Atlas Six. So mixed that the blender of my feelings hasn’t stopped whirling even a week after I finished the damn thing.

At the top of the column labeled ‘good’ feelings, the book is compelling as hell. Once the story gets past Libby and Nico’s barely post-adolescent sniping and swiping at each other, the whole thing is off to the races in a way that both commands and demands the reader’s attention.

I finished at 4 o’clock in the damn morning because I just couldn’t put it down – and when I tried it gnawed at me until I picked it back up again. Over and over until finally I fell out at the end, as exhausted and spent as the characters.

Howsomever, at the top of the column labeled ‘bad’ feelings is the fact that not a single one of these characters is on the side of the angels. There ARE NO angels here. There are no innocents to serve as heartbreaking collateral damage. Saying that no one is any better than they ought to be doesn’t nearly cover it. More like they are all worse than each other in a Möbius strip of turning their backs on anything that could be classified as “light” and diving straight for the bottom.

If you need to like at least one character to follow a story, even if that character is an anti-hero rather than a hero or a lovable or even just a redeemable rogue, there is absolutely no one in this story who remotely qualifies. Every single character, even the ones that at the beginning you might think will turn out to be a bit corrupt but not too awful, seems to have had their moral compass surgically removed at birth or shortly thereafter.

At the same time, for most of its length The Atlas Six seems to sit squarely on the intersection between “power corrupts” and “some gifts come at just too high a price.” And those certainly are elements of the story. But, just as we think we know what’s going on, the centrality of those two tropes is knocked off that center. Or rather, we learn that believing that those are the central tenets also centers characters who may not actually be IN that center. 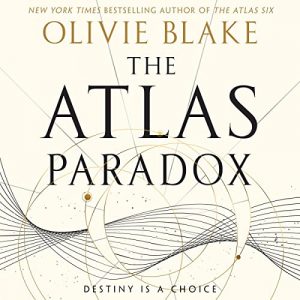 Which admittedly does ramp up the tension VERY dramatically for the second book in the series, The Atlas Paradox. Which, thank goodness – or more likely badness in this case – is already out so I’ll be starting it as soon as I recuperate from the first book.

The thing is that I’m not sure there’s anything honestly new in The Atlas Six. It’s fascinating, it’s compelling, it’s stomach turning at points, but the whole corruption of dark academia thing is not exactly new under the sun. (Recent examples include Babel by R.F. Kuang, and The Scholomance by Naomi Novik to name just a couple). For this reader, the way that all the arcs, at least so far, are trending so deeply downwards means that I’ll be diving into the second book more to see just how far down into hell these people and this situation can go. I suspect it’s pretty damn far. I don’t actually care about ANY of the characters.

So, if you need to like someone, anyone in a story to want to make your way to its end, The Atlas Six may not do it for you as a reader. I’m very much of two minds about the whole thing.

Howsomever, while I may have had a ton of mixed feelings about the story, but absolutely none whatsoever about the full cast narration. The way the book was narrated was truly what both made it possible for me to read and compelled me to finish. The perspective on the events is batted around between seven first person narrators, the Atlas Six themselves plus Libby Rhodes’ boyfriend Ezra Fowler. In the narration, the actor changed when the perspective did, and the actors did a fantastic job of making each other their characters distinct and easy to recognize.

Because voice acting fascinates me, and this group did such a damn good job of it (and because I had to do a fair bit of digging and listening to figure out who played who), here’s almost the full cast list: (I think I got this right but if I didn’t or if someone knows who Damien Lynch voiced PLEASE let me know)

One of the reasons that I plan to listen to the second book, The Atlas Paradox, just as I did The Atlas Six is because this stellar cast is returning for the second book, along with three additional players whose identities I have yet to discover.

However I end up feeling about the second book, even if those feelings turn out to be as mixed as they were for this one, I already know the performance is going to be riveting.