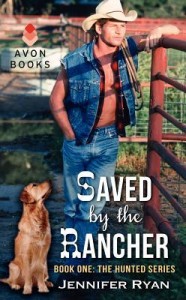 From the moment rancher Jack Turner rescues Jenna Caldwell Merrick, he is determined to help her. Soon, he is doing more than tend her wounds; he is mending her heart. Jenna is a woman on the run—hunted down by her ex-husband, David Merrick, from the day she left him, taking part of his company with her, to the second she finds herself in the safety of Jack’s ranch. More than just a haven, Jack’s offering the love, family, and home she thought were out of reach.

Jack’s support will give Jenna the strength she needs to reclaim her life. The hunted will become the hunter, while David gets what he deserves, when they have an explosive confrontation in the boardroom of Merrick International. But not before Jack and Jenna enter into a fight … for their lives.

Saved by the Rancher is a story of romantic suspense about a strong woman who survives horrific domestic abuse. The detailed descriptions of just how much the main character gets tortured are not for the faint of heart. The number of times and the myriad ways in which the system fails her are almost as stomach-turning.

Jenna Caldwell Merrick has been on the run from her obsessively abusive sadistic ex-husband David Merrick for two years. She runs, she hides, he hires people to hunt and track her, he catches her and beats her nearly to death. Then he leaves her broken body in a pool of her own blood so the cycle can start again.

She has a restraining order against him. It doesn’t do any good. He is rich enough and his family is influential enough that he simply bribes people to provide him with alibis. He coerces hospitals to make her records disappear.

Jenna calls herself “Rabbit” when she contacts her lawyer to make arrangements for her next safe house. Over and over again.

The next safe house her lawyer has arranged is a cabin on his friend Jack Taylor’s ranch in Colorado. Jack is ex-Special Forces. Ben wants Jack to protect Jenna because he’s afraid the next time her ex will kill her. And he’s probably right.

What Ben doesn’t know is that Jack needs saving almost as much as Jenna does. Since he came back, he’s been dead inside. He lost too many men, and he just doesn’t have anything left to give. Until this beaten and brave woman drives into town, and practically collapses in his rented cabin.

Jenna needs him more than anyone else ever has. And what’s left of Jack’s heart wakes up and responds.

Once Jenna starts to heal from her extensive physical damage, she finally begins to feel safe…safe enough to know that any care she feels for Jack and his extended family puts them in danger.

So she finally starts the fight to win her life back. One slow painful step at a time. After two years of running, Jenna has finally decided to make her stand.

Escape Rating C+: This story engendered a tremendous number of mixed feelings. It made for such compelling reading, I finished it in one day. And it does generate a huge amount of anger at the system. Jenna did what she was supposed to do. She got away, she involved the authorities, and the system let her down and protected her abuser.

The frustrating thing about the story is that Jenna’s relationship with Jack happens too fast, considering the abuse that she has suffered. She heals her psychological trauma much, much too quickly to be believable. Their love story was very sweet, and Jack was understanding, but she goes from scared of everyone, especially men, and with very good reason, into a sexual relationship in a matter of weeks. It was just too fast. The book was more than long enough for the build up to be slower. And maybe a mention of some therapy would have made it seem more realistic.

And a quibble. She knew she was being hunted, but she chartered a plane and went on a major shopping expedition to Denver exposing herself and two more women to her hunters? That was just plain foolish and she should have known better.

One thought on “Review: Saved by the Rancher by Jennifer Ryan”