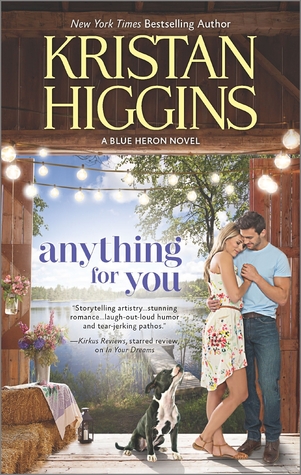 Before you get down on bended knee…
…you should be pretty darn sure the answer will be yes. For ten years, Connor O'Rourke has been waiting for Jessica Dunn to take their on-again, off-again relationship public, and he thinks the time has come. His restaurant is thriving, she's got her dream job at Blue Heron Vineyard—it's the perfect time to get married.
When he pops the question, however, her answer is a fond but firm no. If it ain't broke, why fix it? Jess has her hands full with her younger brother, who's now living with her full-time, and a great career after years of waitressing. What she and Connor have is perfect: friends with an excellent benefits package. Besides, with her difficult past (and reputation), she's positive married life isn't for her.
But this time, Connor says it's all or nothing. If she doesn't want to marry him, he'll find someone who does. Easier said than done, given that he's never loved anyone but her. And maybe Jessica isn't quite as sure as she thinks…

If you think of the phrase, “anything for you” as having a similar type of resonance to Wesley’s famous “as you wish” in The Princess Bride, you’ll get an idea of the relationship between Connor O’Rourke and Jessica Dunn, with the reversal that he’s the prince and she starts the story as something less than a stableboy.

This is not a pretty story, because Jessica does not have a pretty life. It does finally have a mostly happy ending, although there are lots of times during the story where the reader rightfully wonders how these two are ever going to get there. Their romance has a lot of roadblocks in it, and while they both contribute to those roadblocks as adults, the ones they start with from childhood are difficult to get past, and with good reason.

Like so many of the stories in Higgins’ Blue Heron series, Anything for You tells a lot of its story in flashbacks. In fact, the entire first half or possibly two thirds of the book is a flashback. The story begins with Connor’s failed attempt at asking Jessica to marry him, and then goes all the way back to their occasionally intersecting childhoods. Connor’s memories of their past move closer and closer to that fateful evening, without any references to their present circumstances until after the story reaches that heartbreaking NOW. And then moves forward into a future that takes a lot of twists and turns to look brighter. 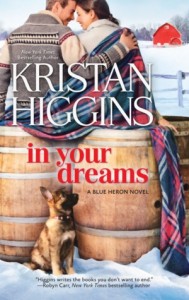 In my review of In Your Dreams, I referred to Jack Holland’s willingness to be any woman’s date for any function where she needs an escort as him being a gentleman, and that he specifically is not the town bicycle. He helps a lot of women out of emotional jams caused by some other man – he doesn’t have sex with every, or even most of, the women he helps.

On the other hand, Jessica Dunn really was the town bicycle in high school. To the point where most people called her “Jessica Does” instead of Jessica Dunn. It sounds kind of sleazy and sordid, until we find out why. Jessica was gathering a group of strong and caring young men who would be willing to protect her younger brother Davey from bullies in exchange for sex with Jessica Does. Davey was born with Fetal Alcohol Syndrome, and needs all the protection that Jessica can give or gather for him.

Both of their parents are alcoholics, and Jessica has been the only person really responsible for Davey since the day he was born. She was 7, and she’s been his parent and his caregiver and his protector ever since.

But in the flashbacks, we see Jessica’s relationship with Connor from the very beginning, and from its rocky start things only go downhill for a long time. Davey’s dog Chico mauls 12-year-old Connor, and Connor’s distant and stuck-up dad drags Connor to the trailer park so he can punish poor Davey by having the dog hauled away to be euthanized. Davey, who can only see the world in black and white, spends his life convinced that Connor killed his dog.

So when adult Jessica and Connor begin their on-again/off-again friends-with benefits arrangement it is with the explicit understanding that it will remain a secret so that the volatile Davey never finds out.

Because Jessica has always and will always put Davey first. Even at the cost of her own happiness. But who is she really protecting? Davey or herself?

Escape Rating A-: Anything for You was not quite as straightforward a romance as the earlier entries in this series. Also, it isn’t necessary to read every book in the series to get what’s going on in this one, but Manningsport is a nice place to visit with interesting people. If you like small town romances, start with The Best Man (reviewed here) to get in on all the fun.

Connor’s life has been relatively easy, and he is perfectly aware of it. He’s not self-centered nor does he think he’s perfect or God’s gift to women or anything like that. He’s just a guy who knows that he has mostly been lucky. His parents were upper middle-class, and while his dad was generally a selfish and self-absorbed bastard, he made sure that his family was well provided for financially if not emotionally. If Connor hasn’t exactly forgiven his dad for leaving their mother for a much younger (and very pregnant) woman, he is also perfectly civil about the whole thing. And his much younger sister Savannah is one of the lights of Connor’s life.

But Connor has loved Jessica Dunn for 20 years, and that isn’t going to change. He has taken whatever bits of her she can manage to give him, and he’s finally realized that it isn’t enough. He’s in his early 30s now and wants to be married to the love of his life and start a family. He’s also not willing to settle for second best – meaning a woman other than Jessica.

So Connor has to somehow get past his past with Davey, who throws a head-banging temper tantrum whenever he sees Connor.

And while Davey may only have an IQ of 50, he is as good as any child at emotionally manipulating his parental figure, in this case, Jessica.

Jessica is caught between several rocks and all kinds of hard places. Growing up as the only responsible party in a house of alcoholics, Jessica has no faith in anyone but herself. Her experience is that she is the only one she can trust not to let her down. She’s also sure that with her background, Connor can’t possibly love her. She’s certain that their relationship is all about the thrill of the chase. And while she is wrong, it is so easy to understand how she would feel that way.

She can’t let herself even think about a future with Connor, or about how she really feels about him, because she is certain that happiness is not for her. And because Davey hates Connor.

The author has done an excellent job of portraying an adult child of an alcoholic. Everything that Jessica is dealing with in the present are a natural response to the unpredictable insanity of her childhood.

Connor’s solution to their many dilemmas is ingenious, and also heartwarming. He has to create a relationship with Davey on Davey’s terms. When things backfire, it is up to Connor to point out how much of Jessica’s reaction isn’t about Davey, but is about Jessica. It’s only when they work things out from there that they have a chance.

Kristan and Little Bird Publicity are giving away a copy of Anything for You to one lucky U.S. commenter:

8 thoughts on “Review: Anything For You by Kristan Higgins + Giveaway”