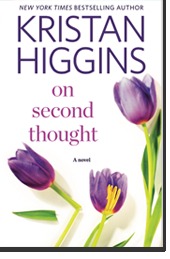 
, multi-bestselling author Kristan Higgins returns with a pitch-perfect look at the affection—and the acrimony—that binds sisters together
Ainsley O'Leary is so ready to get married—she's even found the engagement ring her boyfriend has stashed away. What she doesn't anticipate is for Eric to blindside her with a tactless breakup he chronicles in a blog…which (of course) goes viral. Devastated and humiliated, Ainsley turns to her half sister, Kate, who's already struggling after the sudden loss of her new husband.
Kate has always been so poised, so self-assured, but Nathan's death shatters everything she thought she knew—including her husband—and sometimes the people who step up aren't the ones you expect. With seven years and a murky blended-family dynamic between them, Ainsley and Kate have never been overly close, but their shared sorrow dovetails their faltering worlds into one.
Despite the lifetime of history between them, the sisters must learn to put their differences aside and open their hearts to the inevitable imperfection of family—and the possibility of one day finding love again.

The story is told from the alternating points of view of Kate and Ainsley, half-sisters who have a lifetime of almost-but-not-quite closeness between them. And a really weird family dynamic. Their father, a Major League Baseball umpire, left Kate’s mother to marry Ainsley’s mother. Three years later, with the love of his life dead and a very young daughter to raise, their father begged his first wife to take him back. And she did, but she never completely lost her resentment of the whole situation. It’s hard to blame her.

But that left Kate and Ainsley in a bit of a bind, sister-wise. Kate was ten years older than Ainsley, and Ainsley was so obviously Daddy’s favorite, that they weren’t close growing up. Mutual tragedy brings them together, and they discover in each other the sister and best friend they never had, but always wanted.

Kate’s husband dies after four months of pretty blissful marriage. Unfortunately for Ainsley, Nathan’s death sends her long-term boyfriend Eric into a complete spin into assholishness, not that he was a prince to begin with. Eric doesn’t just break up with Ainsley, he does it publicly, on the blog he posts at her magazine, and in the worst terms imaginable. While Eric was never as good as Ainsley thought he was, his behavior dives to a whole new level of low.

Ainsley arrives on Kate’s doorstep with her adorable dog and her worldly goods, which aren’t all that much. Kate, still in the seemingly endless depths of her grief, is grateful to have the upbeat and perky Ainsley move into her echoing house. Ainsley is equally happy to have a place to stay while she regroups and recovers. Ollie is always happy. Period.

Escape Rating B+: I read this in a single evening. I fell into the story and didn’t fall out until I turned the last page. Kate and Ainsley are women that I would love to know in real life, and I was happy to spend an evening with them.

I will say that the first chapter is very, very rough going. It is obvious from the first paragraph that Kate’s husband Nathan is about to die, because Kate is narrating their last evening together from the perspective of someone who knows what is about to happen. It was impossible not to feel for her. Kate’s profound grief made me keep looking over at my own snoring husband to make sure he was all right. But a big part of me wished that the story could have started after his death. Reading the “but I didn’t know” bits over and over was both sad and wearying. Also wearing. 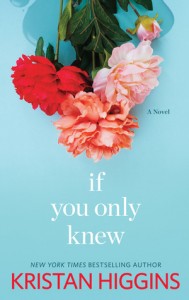 Although there is a romantic element to this story, the romances don’t feel like point of the story, except as they symbolize both women finally able to move on. Which appropriately takes a while. The point of the story is the way that they reach towards each other in a way that will remind readers of the author’s previous book, If You Only Knew.

Kate feels both profound grief and a certain amount of anger. When Nathan died, they had known each other for less than a year, and had only been married for four months. As much as she misses him, she also misses the person she used to be before they met. She had been happy on her own, and if she hadn’t met Nathan she would have continued to be so. The difference that one year has made in her life is beyond heartbreaking.

Ainsley’s situation is a bit different. She met Eric in college, and they’ve been together for 11 years. Literally one-third of her life. She not only loves Eric, she loves his family, and she’s been dreaming of marrying him for almost a decade. He’s always been a bit of a selfish arsehole, but when he breaks up with her via his blog, he pulls out all the stops. Readers will want to shoot him. In the kneecaps, so he suffers longer.

In many ways, Ainsley has a lot more self-examination and reinventing to do, because she’s never been just her. She’s always been part of an “us”, and now that is blasted to smithereens. When she gets her own back, it is epic and awesome.

Both women do eventually find romance, and in the most unlikely places. And the way that they do, particularly the way they both approach that second chance, makes a marvelous conclusion to this story.

I am giving away a copy of On Second Thought to one lucky U.S. commenter.

22 thoughts on “Review: On Second Thought by Kristan Higgins + Giveaway”