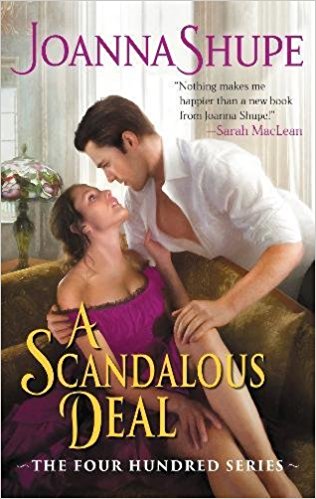 They call her Lady Unlucky…

With three dead fiancés, Lady Eva Hyde has positively no luck when it comes to love. She sets sail for New York City, determined that nothing will deter her dream of becoming an architect, certainly not an unexpected passionate shipboard encounter with a mysterious stranger. But Eva’s misfortune strikes once more when she discovers the stranger who swept her off her feet is none other than her new employer.

Or is it Lady Irresistible?

Phillip Mansfield reluctantly agrees to let the fiery Lady Eva oversee his luxury hotel project while vowing to keep their relationship strictly professional. Yet Eva is more capable—and more alluring—than Phillip first thought, and he cannot keep from drawing up a plan of his own to seduce her.

When a series of onsite “accidents” makes it clear someone wants Lady Unlucky to earn her nickname, Phillip discovers he’s willing to do anything to protect her—even if it requires A SCANDALOUS DEAL.

The business deal between Eva Hyde and Phillip Mansfield may be scandalous, but the story about it is delightful.

And the reason that it is so delightful is that the hero and heroine, especially the heroine, are so different from what is expected, particularly what is expected for their time and place, New York City in 1890.

Phillip Mansfield is a scion of the “Four Hundred”, the extreme upper-crust of New York society. But he’s also a hard man who exorcises the demons in his soul by boxing. He’s serious about the sport, but not a professional. Not that he isn’t good at taking on all comers. He’s very serious about it – also seriously ripped.

And that’s what Lady Eva Hyde notices under his bespoke suit and pristine white shirt – that the body underneath is deliciously well-muscled. Not that she has much experience in that regard. She’s been betrothed three times, but never married. All of her erstwhile fiances have died – and not only not at her hand but far from wherever she happened to be at the moment. But even though she’s completely blameless, three dead fiances does give a girl a nickname, and in her case it’s Lady Unlucky.

Eva doesn’t really care about the name, and she didn’t care a whole lot about the men, either. Not that she wished them dead. But her father arranged her betrothals for business purposes of his own, and she wasn’t sorry to see any of the betrothals end, even if she felt any grief at the reason for the endings.

But her father is now well past arranging anything. Lady Eva’s father, the celebrated architect E.M. Hyde, has gone senile. Today we’d recognize his condition as Alzheimer’s Disease, but in Eva’s day all that is understood is that her father is incapable of working, no longer recognizes her, and is sliding downhill fast.

And that while he may have been an absolute genius of an architect, he was consistently an idiot when it came to his personal finances. He should be wealthy, but instead he is nearly penniless.

To keep them financially afloat, Eva has been pretending to be her father, at least as far as architecture and design is concerned. She has taken commissions in his name, done all the design and drawings herself, and supervised the work, multiple times, pretending that her father is merely ill and will get better.

He won’t, but she will. While the lies gall her, Eva is every bit as great an architect as her father ever was, if not more so. But no one will recognize it, not just because she is forced into this masquerade, but purely because in 1890 no one believed that a woman could be an architect at all, great or otherwise.

One night aboard ship on her way from England to New York to take up the commission that she and her father both need to pay their bills and finance his medial care, Eva lets herself be herself for just one night with a perfect stranger.

Only to discover that her “perfect stranger” is the man she needs to convince that she can oversee his legacy hotel in place of her ailing father. He’s already seen her at her least polished and most vulnerable, and now she has to convince him that she is not merely capable, but twice as capable as any man he might hire in her place. 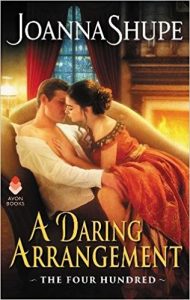 It’s much easier to sell Phillip Mansfield on her architectural talents than it is to pretend that what happened on board ship can never happen again. And as much as she eventually succeeds at the first, she completely fails at the second.

Escape Rating A-: The first book in the Four Hundred series, A Daring Arrangement, was certainly a treat, and A Scandalous Deal is even better. It’s also a bit less predictable, which for this reader is always a good thing.

What makes A Scandalous Deal so delicious is the character of Lady Eva Hyde, because she is nothing like the expected heroine for this time or place, nor is she anything like the hero or anyone she deals with thinks she ought to be. But her differences are what make her such a wonderful heroine for 21st century readers.

Lady Eva is an architect. While this seems anachronistic, it turns out that it’s only by a hair. The architect of Hearst Castle in California, begun in 1919, was also a woman. It’s easy to imagine Eva as a role model for Julia Morgan. 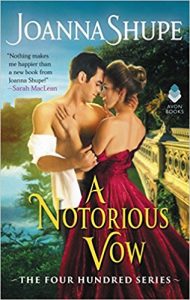 But the difficulties that Eva faces feel very real. No one believes she can possibly be an architect, not even once the truth is revealed and it becomes obvious that she IS an architect. She is also very career minded, and is unwilling to marry because marriage in the 1890s (and considerably thereafter) subsumed the woman’s identity under her husband’s. She needed her work to be HER work, and to receive commissions based on her efforts and not who her husband might be – and she didn’t want to put anyone in a position where they could force her to stop.

While the sexual tension between Eva and Phillip is palpable, the dramatic tension in the story revolves around Eva’s insistence on being treated as an equal, and Phillip’s inability to understand that even his protectiveness is ultimately condescending – no matter how right and proper he thinks it is.

So while the romance is the central core of this story, it is Eva, her work and her need to do that work at any price that give it both its heart and its stand up and cheer resolution. Especially when Phillip performs a very good and very, very necessary grovel.

After this terrific story, which I read in a single day because I just couldn’t put it down, I’m really looking forward to the next book in this series, A Notorious Vow.

GIVEAWAY TERMS & CONDITIONS:  Giveaway open to US shipping addresses only. One winner will receive a paperback copy of A DARING ARRANGEMENT by Joanna Shupe. This giveaway is administered by Pure Textuality PR on behalf of Avon Romance.  Giveaway ends 11/14/2017 @ 1159pm EST. Avon Romance will send the winning copy out to the winner directly. Limit one entry per reader and mailing address. Duplicates will be deleted.

2 thoughts on “Review: A Scandalous Deal by Joanna Shupe + Giveaway”