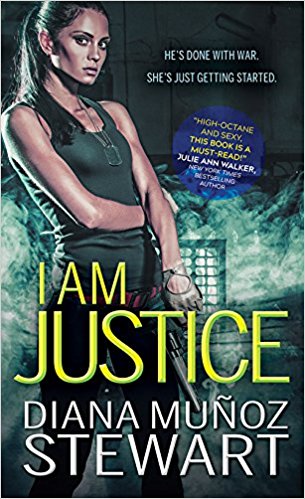 This bad-ass band of sisters plays for keeps.

She's ready to start a warJustice Parish takes down bad guys. Rescued from the streets by the world-renowned Parish family, she joined their covert sisterhood of vigilante assassins. Her next target: a sex-trafficking ring in the war-torn Middle East. She just needs to get close enough to take them down...

Think of this story as a big message about paying it forward – backed up with bullets. Or as a 21st century league-of-extraordinary-but-not-in-the-least-bit-gentle women. Or perhaps as the story of a group of contemporary Amazons who specialize in giving people who abuse women and girls every single thing that they deserve – with extreme prejudice.

The Parish family has a secret. Or is a secret. Actually it’s a little bit of both. On the surface it looks like Mukta Parish runs an elite boarding school for girls. She has also adopted a number of young girls from heartbreaking circumstances. And both of those things are true.

But it is also a front. The Parish family rescues girls and women being abused and trafficked, just as Mukta herself was once abused. The foundation she founded continues to rescue girls and women in those horrible circumstances, all over the world. And some of those girls she adopts into her family – and trains them to be covert operators and assassins, who go in and rescue women in countries and situations where official authorities won’t go – or don’t care to even try.

Justice Parish is one of her daughters. But someone in Justice’s family has betrayed her, so she’s sent, undercover, with a charitable organization that can get her where she needs to be without relying on her family’s resources.

In the process of exposing the traitor in her own home, Justice finds herself leaning on, or falling for, the ex-special forces soldier who thinks that she’s just a PR flack. When all of their plans go completely pear-shaped – they realize that the only person that each of them can really count on is the other.

And that so much of what they’ve always believed is a lie.

Escape Rating B+: As the saying goes, this story is not for the faint of heart. Justice was herself rescued from horrific circumstances – circumstances which still haunt her days and disrupt her nights. In turn, she spends her life rescuing others from hells that would be neverending if not for her family’s operations.

She has no doubt that she is a vigilante operating outside the law. And the same time, in most of the places where she operates, the law either turns a blind eye to the abuses or is corrupt to the point of being part of the problem.

But whatever her mission ostensibly is in Jordan, the truth is that she is out for revenge. The traffickers that she intends to kill are the same men who killed her sister Hope. And she wants to make them suffer. But she’ll settle for making them dead – no matter what it takes.

She hasn’t factored falling in love into her plans. Nor has she counted on questioning not just the loyalties of those who have betrayed her, but also her own. It’s a hard journey for Justice. It begins in a difficult place and mostly gets worse – as well as more torturous.

Justice reminds me of some of the more tortured and less busty versions of Lara Croft in that both are fighters and neither have pretty background stories. I like her loyalty to her family, and at the same time I like the way she finally wakes up and starts to question what she’s always believes. This story is a wake-up call for her. But it’s also a very gritty story, and lots of bad things happen to both good and bad people, described in graphic ways that do not make for easy bedtime reading.

Yes, this is a romance and her hero is both drool-worthy and worthy of her. Sandesh Ross is a man who will fight beside her, and never try to keep her safe – especially as they both know that safety is an illusion. They make a great team.

But it’s Justice Parish’ story all the way. And if you like your heroines very gritty and extremely kick-ass, it’s a damn good one.

I am giving away a copy of I Am Justice to one lucky US/CAN commenter.

9 thoughts on “Review: I Am Justice by Diana Munoz Stewart + Giveaway”