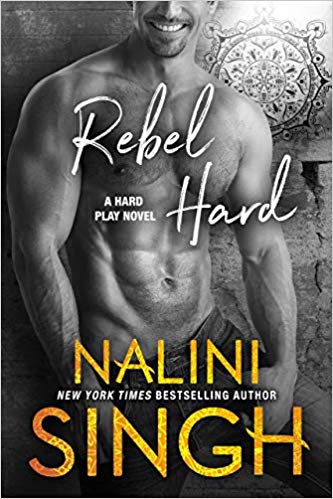 Nayna Sharma agreed to an arranged marriage in the hope it would heal the fractures in her beloved family… only to realize too late that a traditional marriage is her personal nightmare. Panicked, she throws caution to the winds, puts on the tiniest dress she can find, and ends up in the arms of a tall, rough-edged hunk of a man who has abs of steel—and who she manages to mortally insult between one kiss and the next.

Abandoned as a child, then adopted into a loving family, Raj Sen believes in tradition, in continuity. Some might call him stiff and old-fashioned, but he knows what he wants—and it’s a life defined by rules… yet he can’t stop thinking about the infuriating and sexy woman who kissed him in the moonlight then disappeared. When his parents spring an introduction on him, the last woman he expects is her. Beautiful. Maddening. A rulebreaker in the making.

The Hard Play series is a prequel to the author’s Rock Kiss series, linked by my and the rest of the Book Pushers favorite alpha male, Gabriel Bishop, better known as T-Rex. But you certainly don’t have to read Rock Kiss or even Gabriel’s book, Rock Hard to get right into Rebel Hard.

As I said, this series is a prequel, so those events haven’t happened yet. However, the series is absolutely marvelous! 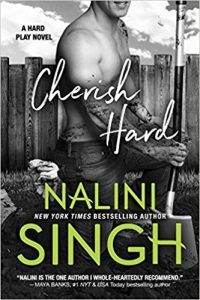 Rebel Hard is the second book in the Hard Play series, after last year’s Cherish Hard. Again, absolutely awesome. But you really don’t need to read Cherish Hard to get into Rebel Hard, because these two stories are happening in parallel.

Isa, the heroine of Cherish Hard and Nayna, the heroine of Rebel Hard, are besties. Really, really solid besties and have been forever. Both stories begin at the same time and place, the party where Isa meets Sailor, and where Nayna meets Raj. And it both cases it’s at least lust at first sight, if not something more.

In Cherish Hard, we saw what transpired between Isa and Sailor after this fateful party. Now it’s Nayna’s turn. And while her story, both before and after the party is completely different, both do end in the same place.

Rebel Hard isn’t really a story about rebellion, at least not in a big way. But it is about the kind of small rebellions that happen in everyday lives. And that’s true even though the chapter headings of Rebel Hard reflect the way that Nayna’s life seems to be taking a turn straight into a Bollywood melodrama.

This is, in the end, the story of Nayna’s rebellion. She begins the story as her parents’ “perfect” and perfectly reliable daughter. Nayna has suppressed her own desires, and had them suppressed for her, in the wake of her older sister’s very big rebellion – where she married someone completely unsuitable, ran away from home, and eventually got divorced.

In their fairly traditional Indian family, Maddie went pretty far off the rails – and it seems that Nayna is the one that was punished for it, with her movements and teenage life claustrophobically restricted by their frightened parents. Now Maddie is back, and she and Nayna are both adults, but Nayna is still letting her parents control her life while Maddie seems to get away with everything.

Nayna feels resentful and taken for granted – and she feels the walls of her world closing in. She had agreed to let her parents arrange a marriage for her, but now that the process is underway Nayna feels like her cage door is closing. That the candidates she meets turn out to be self-absorbed douchebags probably isn’t helping.

So she and Isa break out one night, and go to what to them seems like a fairly wild party – not that it actually is. But they are among strangers, and for one night they can be whoever and whatever they want to be. They are free from the different but equally restrictive expectations they live with.

And Nayna, intending to take a little bitty walk on the wild side, meets Raj, and discovers a part of her that wants to be wild – but only with him.

Of course he turns out to be the next candidate her parents introduce her to. Because that’s the way these stories always work. Just as she’s finally figured out that as much as she loves her parents, and as much as they love her, she has to experience life on her own terms before she gets married. And that she wants to marry someone who sees the real her, whoever that turns out to be – even though her parents don’t.

The story here is the tug of war, both within and between Nayna and Raj, and with all of the conflicting sets of expectations set up by not merely the two of them, but between both of their close, loving and hyper-involved families.

Everyone wants what’s best for everyone else. But in the end only Nayna and Raj can make that decision – no matter how much pressure is put on them, from each and every side.

Escape Rating A-: It took me a long time to get into this one – longer than usual for one of Nalini Singh’s books. In retrospect, I don’t think it was the fault of the book. I just wasn’t in the mood for a romance for several days.

Once I got into it, it turned out to be a breathlessly fast read, and I enjoyed every minute of it.

Part of what made this story so interesting was that it is steeped in the Indian expat culture as it is lived in New Zealand – the setting from which the author herself springs. The families are very close-knit, as is the entire community. The interconnectedness of family and community is something that used to be a lot more common. People used to rely on not just their marital family but also their birth family and their extended family all their lives, and that’s something that doesn’t happen in the wider Western society as much anymore.

Nayna is a great character through which to portray both how lovely that can be and equally how smothering it can be. At the same time, the recognition that she has caught herself in her own trap is familiar no matter what culture one comes from. She has become the “good” daughter because her sister was the “bad” daughter, so she feels that she will only be loved if she is perfect. And she is afraid of what will happen if she isn’t.

Their sometimes desperate realism about what will and won’t work for each of them is what makes this story sing. And dance. Definitely dance.