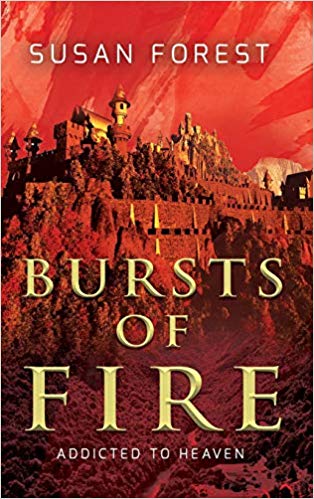 To survive. To fight. To restore balance.

The Falkyn sisters bear a burden and a legacy. Their mother, the imperial magiel of the kingdom of Orumon, protects her people from the horrors of the afterlife by calling upon the Gods with a precious Prayer Stone. But war among the kingdoms has brought fire and destruction to their sheltered world. When a mad king's desire to destroy the Prayer Stones shatters their family, the three girls are scattered to the wilderness, relying on their wits and powers they don't yet master.

Assassin. Battle tactician. Magic wielder. Driven by different ambitions, Meg, Janat, and Rennika are destined to become all these and more. To reclaim their birth right, they must overcome doubtful loyalties within a rising rebellion; more, they must challenge a dogma-driven chancellor's influence on the prince raised to inherit his father's war: a prince struggling to unravel the mystery of his brother's addiction to Heaven.

I signed up for this tour because, well, epic fantasy has always been one of my loves, and this book looked interesting. I’ll admit that the series title, Addicted to Heaven, gave me more than a bit of pause, but as it turns out, the heaven that people are addicted to is nothing like contemporary Western versions of heaven.

Bursts of Fire is very much a part of the epic fantasy tradition. There were times, in fact, when it felt like specific epic fantasies. But it does such a good job of exploring both its new facets and riffing on the stories from which it sprang that it made for a darn good read.

And I was on an airplane and this book was next in my queue. Bursts of Fire turned out to be a terrific book to transition from Worldcon back to “real life” as I traveled from a place where everyone was talking about SF and Fantasy and back to the so-called real world where those discussions are not quite so commonplace.

The story of Bursts of Fire begins in the way that quite a few epic fantasies begin – where the kingdom is under siege and the heir to the throne gets smuggled out of town ahead of the rampaging horde.

And that’s where the differences begin.

The heir isn’t the heir to the throne. And the heir isn’t an heir. Instead, the heiresses to the king’s magical advisor, all three of them, sneak out of the capital with the help of their nanny. Who they still need, as the oldest girl is 17 and the youngest is 11. And none of them have the remotest clue about how to manage on their own – or how to manage period without people waiting on them hand and foot.

They’ll have to figure it out – and somehow manage to grow up, in the midst of a civil war where they are being hunted by both sides. The forces of the usurper believe that all magic is evil – and the rebels just want to use them for their powers.

Powers that they mostly aren’t trained to use. They’re alone, desperate, and on the run. But at least they have each other. Until they don’t.

Whether they can figure out the right course to save themselves, save each other, and save the people that they feel responsible for, is a race against desperation and despair.

And just when they think they might have a chance to right at least a few of the wrongs – they discover just how bad things really, really are.

Escape Rating B+: Bursts of Fire turned out to be a terrific airplane book. Anything that can keep me distracted for 3-4 hours of an 8 hour flight is very much appreciated. And this certainly did.

As has been a relatively recent but also extremely welcome trend in epic fantasy, Bursts of Fire is a heroine’s journey rather than a hero’s journey. Or in this particular case, three heroines’ journeys. At the same time, the story begins on a familiar note, as the chosen one – or in this case chosen ones – are thrown from their original setting to make lives for themselves, and oh-by-the-way save the world.

Part of what does make this a bit different is that there is no mentor character to provide guidance – or for them to rely upon. They lose Nanny almost immediately. She was the one their mother gave the plan to, so the girls are on their own, lost and desperate.

Also very, very young and completely out of their depth. Only the oldest, Meg, has a real clue about just how bad things are and just how much things have changed for them. Little Rennika is too young to understand, and middle-sister Janat is too self-absorbed.

Janat is a character that I never warmed up to, and her self-absorption and unwillingness to grasp their situation continues throughout the story, making this reader grateful that the relatively mature Meg is the primary point of view character.

Meg understands the stakes earliest. Rennika is young enough to adapt. Janat is a problem from beginning to end, a problem that it looks like is only going to get worse.

What’s gone wrong with the kingdom did not make much sense at first. The reader is dropped into the middle of the story, just as the girls escape – and no one seems to know why their ally has suddenly attacked. As the story progresses, it becomes clear – for select definitions of clear – that no one really does know why he went off the rails. They just see the effects – and those effects are gruesome.

War is hell, and civil war is particularly hellish. The rebels want peace and they want to go back to the way things were – as much as is possible after two years of war. The girls, who have become young women fired – or broken – in the crucible of that war want to save as many people as possible, want to reverse the sudden upwelling of prejudice against magic users fostered by the usurper and his advisors, and want to take up the purpose that their family has always undertaken – to visit heaven and intercede with the gods on their people’s behalf.

The magic system of this world is fascinating and different, and their gods are real and act upon their world in ways that can be seen and measured if not countered. The primary manifestation of that magic is the magic users’ uncontrolled shifting through time. Magic has a price, and becoming unmoored from the time you are living is part of that cost.

The glimpses that all three sisters receive of their past, present and future are sometimes heartbreaking, sometimes heartening, and always confusing. It is as much of a curse as a gift, but their ability to intercede with the gods is both powerful and necessary in this cosmos.

That the usurper is determined to break that connection powers his mad campaign against his former allies – and the reasons for that determination are shattering for the kingdom, the reader, and his heir.

That the heroines are all very young leaves this book, and presumably the series it begins, balanced on the knife edge between young adult and adult fantasy.  The protagonists may be young adults, but the situations in which they find themselves feel adult in their consequences.

In the end of Bursts of Fire, we, and the characters, know more about the reasons for the fractured state of their world, but are no closer to a resolution. This is a story about a world that is broken – and it is not made whole by the end. There must be future books in this series, and I’m looking forward to reading them.

I am giving away a copy of Bursts of Fire to one very lucky US/CAN commenter!

8 thoughts on “Review: Bursts of Fire by Susan Forest + Giveaway”