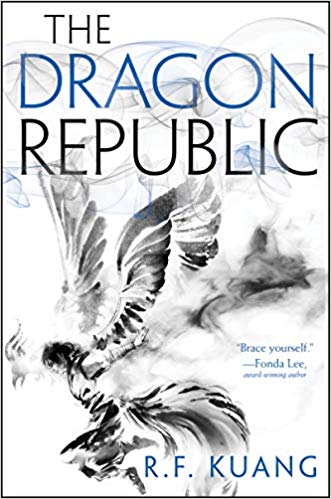 In the aftermath of the Third Poppy War, shaman and warrior Rin is on the run: haunted by the atrocity she committed to end the war, addicted to opium, and hiding from the murderous commands of her vengeful god, the fiery Phoenix. Her only reason for living is to get revenge on the traitorous Empress who sold out Nikan to their enemies.

With no other options, Rin joins forces with the powerful Dragon Warlord, who has a plan to conquer Nikan, unseat the Empress, and create a new Republic. Rin throws herself into his war. After all, making war is all she knows how to do.

But the Empress is a more powerful foe than she appears, and the Dragon Warlord’s motivations are not as democratic as they seem. The more Rin learns, the more she fears her love for Nikan will drive her away from every ally and lead her to rely more and more on the Phoenix’s deadly power. Because there is nothing she won’t sacrifice for her country and her vengeance

The sequel to R.F. Kuang’s acclaimed debut THE POPPY WAR, THE DRAGON REPUBLIC combines the history of 20th-century China with a gripping world of gods and monsters, to devastating effect. 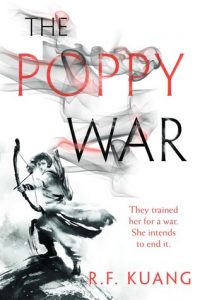 I thought that the first book in this series, The Poppy War (also the series title) was absolutely amazing. I couldn’t wait for this second book to come out. Now that I’ve read The Dragon Republic, I have to say that it’s even better than its predecessor. And I can’t wait for book 3, whatever it turns out to be called and whenever it appears.

The action in The Dragon Republic begins in the opium-clouded, blood-soaked aftermath of The Poppy War. (This is a series that desperately needs to be read in order, and as close together as you can manage – which makes waiting for book 3 absolute hell.) Our heroine, Rin, is leading a small remnant of the Cike, the ragtag unit of Shamans used by the Imperial Army.

But the Cike are on the run from their former masters. Or would be if anyone knew that some of them were still alive. Not that their incognito status is going to last long. Because whenever a situation is working in Rin’s favor – it NEVER lasts for very long.

Rin is supposedly their leader, after she got their last leader killed at the end of the first book. Well, at least that’s how everyone seems to see it, and their loyalty to her seems to be tempered by that condition. None of them seem to be sure whether she’s making good decisions or determined to get them all killed in her mad quest for vengeance.

That she spends the first part of this story in an opium-induced haze does not help them put their trust in her, does not lead her to making remotely sensible decisions, and makes the opening moves in this very long game seem as murky as Rin’s thought processes, which are disjointed at best and nightmarish at worst.

Just when it looks like their current employer is finally going to give Rin the weapons she needs to take her war back to the empire – and empress – that betrayed them, she is sold out. But then, that’s what pirate queens do – and what Rin should have expected if she were operating in the present even half the time.

That betrayal, the latest in a long, long line of betrayals that Rin has suffered and survived, is nearly the breaking of her. But she’s been broken before, and just like each of those previous times, Rin rises from her own ashes, only to fall and rise again.

Just like the phoenix that she is. She really, really is. And she’s finally ready to set her world on fire.

Escape Rating A+: I loved The Poppy War, and I loved The Dragon Republic every bit as hard. I say hard because this military epic fantasy is very dark.

I mean dark to the point where in order to call this series grimdark it would actually need to lighten up a bit. This is one of those stories where the light at the end of the tunnel is always the local equivalent of an oncoming train, and where things are always darkest just before they turn completely black.

And yet, Rin always keeps moving forward. Or sideways. Or through. She is relentless, even if, or sometimes especially because, she is heading in the wrong direction.

Also there’s an actual demon. Or god. It depends on one’s perspective.

This is also one of those stories where nothing is remotely the way it seems – although many people seem to be aware of that. Just not Rin. She’s trying to avoid or avert her destiny, and one of many methods of avoidance is to allow herself to become someone else’s tool – not that she isn’t often perceived as a tool in other senses of that word.

And certainly not that there are not plenty of tools around. But Rin’s desire to not be responsible for her own actions allows her to be used by the biggest tool around – not that he isn’t also being used by even bigger tools.

It’s tools all the way down.

But Rin blazes at the center of this story, even when her own fires are banked – against her will. Burning is who she is and what she does. She is the living avatar of the Phoenix, and her fire is meant to consume everyone, including herself.

This is the story of her learning to master that fire – and learning to turn that destruction outward and away from herself – to the destruction of her enemies. Even if it’s only at the end that she finally figures out at least some of who those enemies really are.

And that she has the power – and finally the will – to take that fight to them. But not until OMG the next book. AAARRRGGGHHH!

2 thoughts on “Review: The Dragon Republic by R.F. Kuang”