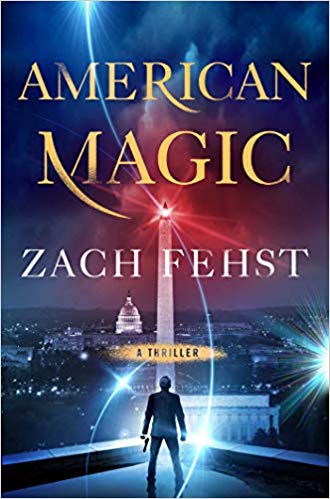 In this fast-paced, international thriller, chaos erupts after a shadowy figure with ties to an elite and ancient society posts incantations on the dark web that allow people to perform real magic.

When an enigmatic message uploaded to the dark web turns out to contain an ancient secret giving regular people the power to do impossible things, like levitate cars or make themselves invisible, American government officials panic. They know the demo videos on YouTube and instructions for incantations could turn from fantastical amusement to dangerous weapon at the drop of the hat, and they scramble to keep the information out of the wrong hands.

They tap Ben Zolstra, an ex-CIA field operative whose history with the Agency is conflicted at best, to lead the team that’s racing to contain the dangerous knowledge—and track down the mysterious figure behind the leak who threatens that even more dangerous spells will be released one by one until the world as we know it no longer exists.

This sweeping, globe-spanning thriller explores the dark consequences of a question mankind has been asking for centuries: What if magic were real?

American Magic is a spy-thriller for everyone who ever wondered what would happen if someone deliberately broke the Statute of Secrecy in Harry Potter – in other words, how would the world react if magic suddenly turned out to be real – and the entire world wanted to weaponize it.

Of course they would.

It’s like a crossover story where Jack Reacher or Jack Ryan don’t so much meet Harry himself as run into some disaffected muggleborn who ran away from magic with their memory intact and decided to stick it to everyone who ever looked down upon them for not being pureblood. Or powerful. Or, really, sane.

In this version of our world, someone uses the dark side of the internet to release a video that provides complete instructions on how to perform one big piece of magic – telekinesis. That’s basically the ability to move sh*t with your mind. (A book came out earlier this year with that in the title, and I want to read it for the title alone!)

The CIA has found a video, also on the internet (isn’t everything, sooner or later?) of a woman who can move a car with her mind. They haven’t found anyone within their own ranks who can move more than pencil – and they want her.

It does, of course, matter to him. And to her. So Ben Zolstra, who is supposed to bring Eila Mack over to the CIA’s side – takes her side instead. And takes her out of the “safe house” where the CIA has her imprisoned.

From that point it’s off to the races on this thrill-a-minute ride, as the supposed “good” guys, the actual “bad” guys, and some even more terrible guys, for loose definitions of good, bad and guys, all chase after Ben and Mack.

In either the hope or the fear of putting the “magic” genie back in its magic bottle before it’s too late.

Escape Rating A-: For readers looking for a spy thriller with an interesting twist, American Magic is a hell of a lot of fun. Anyone expecting the emphasis to be on the “magic” in the title is probably going to be disappointed – because this is not a fantasy.

American Magic is very much in the spy thriller tradition. Magic in this story is treated as if it were a weapon of mass destruction. It the reader substitutes a bioterrorism weapon for “magic” the story works just as well.

And that’s part of its charm. What would happen if the secret of magic were suddenly revealed, and some people discovered that they suddenly had the power to move things with their minds. Or teleport. Or throw fireballs.

First the secret wouldn’t remain secret. Second, chaos. With the internet, no information can be kept completely secret for very long. And once something is known, it can’t (usually) become unknown – at least not overnight.

Would it be weaponized? Of course. Would some people and organizations want to use it for nefarious purposes? It’s hard to imagine they wouldn’t. Would governments try to restrict the use of this new power to only their own side? History has the answer for that and it’s yes. If you don’t think so, look at the history of the ability to build an atomic bomb.

It’s from that spy thriller genre, however, that we get most of the actual plot of this story. Ben Zolstra is the epitome of the “rogue agent” who wants to serve his country but refuses to kowtow to the idiots in charge of it. He’s a quintessential lone wolf who is willing to do what needs to be done – but only if his bosses are willing to get out of his way.

And they don’t, because those same idiots can never let go of the illusion of control. And thereby hangs one thread of the story, as what should be the side of good chases down their own agent because he isn’t playing by their rules.

The most interesting characters in the story are Eila Mack, the young woman trying to claw her way back to a decent life who suddenly discovers she has magic, and Desdemona Heaton, an elderly and disgraced scholar who discovers that the myths and legends she has always believed in, the research in those legends that has destroyed her academic career – was right all along.

There is magic in the world, and there are people determined to keep that secret at all costs. Including the lives of anyone who gets in their way.

The fun in this one is watching this unconventional trio, the agent, the scholar and the mage, find a way to get that genie back in its bottle – and get everyone, both good and bad, off their backs. All the want is to put the world back together – even if none of them are quite together themselves.