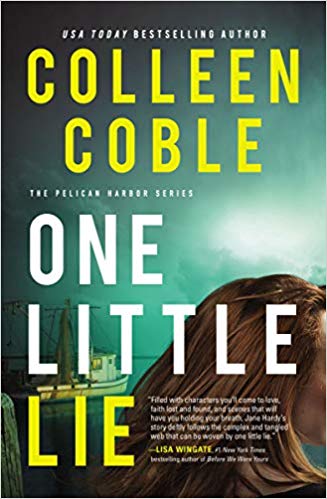 When Jane Hardy is appointed interim sheriff in Pelican Harbor, Alabama, after her father retires, there's no time for an adjustment period. He is arrested for theft and then implicated in a recent murder, and Jane quickly realizes she's facing someone out to destroy her father.

They escaped from a cult fifteen years ago, and Jane has searched relentlessly for her mother—who refused to leave—ever since. Could someone from that horrible past have found them?

Reid Bechtol is a well-known journalist who makes documentaries, and his sights are currently set on covering Jane's career. Jane has little interest in the attention, but the committee who appointed her loves the idea of the publicity.

Jane finds herself depending on Reid's calm manner as he follows her around taping his documentary, and they begin working together to clear her father. But Reid has his own secrets from the past, and the gulf between them may be impossible to cross.

There’s more than one lie at the heart of this mystery – and none of those lies are exactly little ones.

This is also a story about revenge being a dish best served cold – but it never gets all that cold in the Gulf Shores. And the revenge story, while fascinating, turns out to be a smokescreen for the bigger reveal. But no less deadly for all that.

When this story begins, it’s not where we think it’s going to be. It’s also not when we think it’s going to be. But that beginning sets up the wider story in a way that doesn’t become clear until much later in the book, after we’ve gotten to know these characters and have learned why at least some of them relate back to Button, 15 years old and 15 years ago, fleeing a religious cult with her father as bullets fly around them.

Fast-forward those 15 years and the focus turns to Jane Hardy, the newly minted police chief of tiny Pelican Harbor, following in her father’s law enforcement footsteps, occupying the office that was his not long ago.

There’s a crime spree in town. Someone claiming to be a vigilante has been punishing, let’s call it moral turpitude, all over town. The exposure of the wrongdoers has generally been embarrassing, but not deadly. At least not until now.

Jane suddenly has not one but two murders to investigate. One looks like the vigilante just went too far, or simply didn’t know that his victim was allergic to feathers. The intention was to leave the adulterer tarred, feathered and locked in the stocks, but instead her allergy killed her.

As strange as that may have been, it makes more sense than the body that one of the local shrimpboats hauls up in its nets. Or rather, the headless, armless and legless corpse that the old shrimper finds in a cooler that he hauls up in his nets.

So Jane has two murders to solve and a documentary filmmaker in tow. The Mayor wants to reap the good publicity of having a female Police Chief in an era where they are fairly thin on the ground.

But that publicity may not be all that the city fathers and mothers hoped it would be. One of Jane’s officers is a suspect in the tar-and-feather murder. He’s certainly the married man the victim was having an affair with. Jane’s father, the former chief himself, is arrested by the FBI for a whole laundry list of crimes.

And the documentary filmmaker has an agenda that Jane will hate and love in equal measure. If they live long enough to learn the truth about that one, long ago, little lie.

Escape Rating B+: I have to start off by saying that I am absolutely one with Jane Hardy’s taste in reading. The two books she is mentioned as reading are Colleen McCullough’s Masters of Rome series and C.S. Lewis’ The Screwtape Letters. Both are old favorites. And there’s an audiobook of John Cleese reading Screwtape that is marvelous if you can find it – and still have a cassette player around.

But seriously, that peek into Jane’s reading habits made it easy to get inside her head and really feel for her as a character. Readers identify with other readers.

Climbing down off my librarian soapbox, I should probably talk about the two mysteries in this story, because there are definitely two – and surprisingly for a police procedural type mystery they are not related to each other.

Come to think of it, there are really three mysteries.

The most sensational is the vigilante turned killer, not that vigilantes don’t usually turn out to be killers. Pelican Harbor is a small town, which means that everybody knows everybody else’s business whether they want to or not. That someone would take their frustrations with other people’s immorality out in some kind of public shaming doesn’t seem all that far-fetched. But when it turns into murder it feels like a strange kind of escalation – only because it is.

The arrest of Jane’s father doesn’t seem to fit in anywhere with what’s happening, until it does. When that plot thread wriggled up out of the blue I’ll admit that I thought they had to be connected even if neither the how nor the why was obvious. And they were, just not in anything like any of the ways I was expecting.

But the heart of both of those mysteries leads to the third. While they aren’t all part of the same thing, they all have one big thing in common. Both of these mysteries involve the betrayal of someone close to Jane. Someone that she has misjudged all along. Which leads back to that first lie.

While she worries that her father has lied to her about who and what he really is, that he might be guilty of the crimes he’s been accused of, that’s not the real betrayal. His real betrayal occurred 15 years ago on that night they fled the cult compound, the scene that opens the book.

Jane had a child. Had literally just had the child. Her father told her that her perfect little boy was dead. He lied. And that’s the lie that comes back to haunt them all.

What made this story so fascinating was that it was so easy to empathize with so many of the characters. There were two who were just a bit out there, notably the vigilante killer who had a much bigger plan than anyone realized and was just a bit cray cray. And the documentary filmmaker’s ex who just felt tacked onto the story without really being integral to a plot that already had plenty of meat to it.

But at the heart the story revolved around Jane, her father, that documentary filmmaker, and his son. All of them felt like real people and what they did and the reasons that they did it all made sense. Even, in the end, the lie at the start of it all.

3 thoughts on “Review: One Little Lie by Colleen Coble”