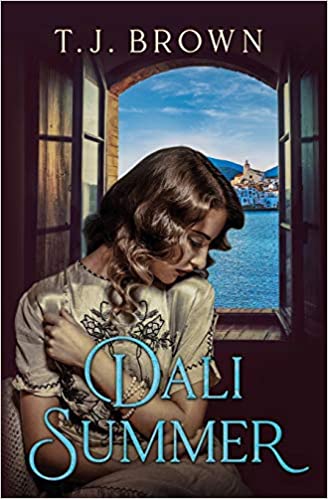 Her wild and vivid visions inspire an icon...

Nothing is more important to prim, colorblind Dolors Posa than family and living down the shame of her illegitimate birth, but when the sudden onset of fantastical visions threaten her sterling reputation, she must search for answers before the inhabitants of the tiny village of Cadaqués brand her as demente-- crazy like her mother. In a quest to stop her hallucinations, she befriends a beautiful, intoxicating fortune teller and her handsome anarchist brother, as well as becoming a reluctant muse for thirteen-year-old Salvador Dali. In a summer that changes everything, Dolors must choose between her family's reputation and a life filled with adventure, friendship, rapturous color and the possibility of love.

Set against the political upheaval of 1917 Spain, Dali Summer captures the fierce spirit of Catalonia, the generosity and stubbornness of its people and the blossoming promise of a woman who thought life was bland and empty and had long ago had passed her by.

So many stories are about characters that earn their names, their titles, their reputations, or a bit of each. Dali Summer, on the other hand, is the story of a woman who initially owns her name but loses that ownership, and who finally sheds her investment in a reputation that was never her own.

Dolor is Spanish for pain and ache, and for sorrow and grief. Initially, Dolors Posa is all of those things. She is lonely and filled with sorrow, grieving for her father, the mother she never knew, the life she might have had. The story opens with the pain of a sudden, intense, blinding headache that ironically lifts one of Dolors long standing aches while replacing it with a potentially greater one.

Dolors is completely colorblind. She sees the world only in shades of gray. But it was not always so. As a child, she saw colors like everyone else, but when her grandmother, in a fit of temper, struck her with a heavy crystal in the back of the head, Dolors’ color sight was taken away. Seemingly permanently.

But the vision she sees while in a fugue state brought on by that terrible, blinding headache is fantastical in the extreme – and in brilliant, living color. Even in technicolor, although that word hadn’t yet been invented in the summer of 1917.

The sudden re-emergence of color in Dolors’ life is just the beginning. The visions come to the attention of a very young Salvador Dali, just 13 and already on the road to becoming the eccentric artist that he will be remembered for. But in 1917, he is young, still learning, but fascinated with Dolors’ visions and willing to stretch his art to make them come to life.

Dolors’ need to discover the reason for her visions – or more precisely to determine whether or not she is going mad, bring her to the attention of Lidia and Xavi Sala, sister and brother, each revolutionary in their own ways.

Lidia’s revolution is a desire for sexual liberation, she wants to love everyone and doesn’t care who she hurts along the way. Her brother Xavi, however, wants to change the world. Xavi wants to free his country and turn it into a workers’ paradise.

Their flamboyant intersection with Dolors and her tiny little village of Cadaqués will change all of them – some for the better, some for the worse. But before Dolors can be shed of the griefs and sorrows that have weighed down her entire life, first she must drink the bitter cup to its dregs.

Escape Rating B+: There is a LOT going on in this story. At the same time, at its heart its a very simple story, the story of one woman moving out of the long shadow of her family’s expectations and finally making a life for herself.

The complications of the story feel like they are all in the background and setup. The introduction of the very young Salvador Dali is fascinating, but at the same time feels like it’s more of a “hook” to get readers to pick up the book than it is an integral part of the story. He’s kind of a symbol of Dolors unstated desire for more color in her life, both literal color and figurative color, than she is willing to own up to at the beginning.

The political upheaval of the period is represented by Xavi’s revolutionary agitation, but again, it feels more symbolic than it does a real part of Dolors’ personal story – and this is at its heart her personal story and not the story of the wider world.

The political ferment does have its effects. Even in backwater Cadaqués, the world is changing. A change that inveigles itself into Dolors’ life with the return of color and the introduction of the Salas.

But the story is of Dolors’ quiet revolution. The way that she slowly, and initially very cautiously, moves herself out of her grandmother’s long and hateful shadow, and at first carefully and then recklessly starts to live her own life, always looking over her shoulder at the demons of the past.

While Dolors’ is trying to move forward in her life, her grandmother is doing her level best – and worst – to keep the entire family moored in the past and under her heavy thumb. It’s a situation that brews throughout the story until it comes to its inevitable head at the climax.

But the one to watch in this story is Dolors’ every step of the way. This is the story of the brilliantly colored butterfly emerging from its drab cocoon. A story that is slow to unfold but surprisingly lovely in its portrait of a woman on the cusp of change.