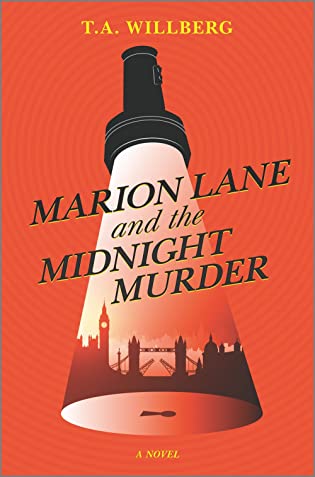 The letter was short. A name, a time, a place.
Marion Lane and the Midnight Murder plunges readers into the heart of London, to the secret tunnels that exist far beneath the city streets. There, a mysterious group of detectives recruited for Miss Brickett’s Investigations & Inquiries use their cunning and gadgets to solve crimes that have stumped Scotland Yard.
Late one night in April 1958, a filing assistant for Miss Brickett’s named Michelle White receives a letter warning her that a heinous act is about to occur. She goes to investigate but finds the room empty. At the stroke of midnight, she is murdered by a killer she can’t see—her death the only sign she wasn’t alone. It becomes chillingly clear that the person responsible must also work for Miss Brickett’s, making everyone a suspect.
Almost unwillingly, Marion Lane, a first-year Inquirer-in-training, finds herself being drawn ever deeper into the investigation. When her friend and mentor is framed for the crime, to clear his name she must sort through the hidden alliances at Miss Brickett’s and secrets dating back to WWII. Masterful, clever and deliciously suspenseful, Marion Lane and the Midnight Murder is a fresh take on the Agatha Christie—style locked-room mystery with an exciting new heroine detective at the helm.

Somewhere in the depths of Miss Brickett’s Investigations and Inquiries, which masquerades as Miss Brickett’s Secondhand Books and Curiosities, there must be a door that leads to the Invisible Library as well as some stacks that wander into the “L” space that leads to Terry Pratchett’s Discworld.

Or if there isn’t, there certainly ought to be. While the Discworld librarian would probably just throw some bananas at the entire mess, Irene Winters, the Librarian who serves as spy, agent and occasionally thief on behalf of the Invisible Library would fit right into Miss Brickett’s. To the point where I wonder if the Library hasn’t used Miss Brickett’s as a training program on multiple occasions.

Because first-year Miss Brickett’s apprentice Marion Lane has exactly what it takes to become Irene’s kind of librarian, and her misadventures read like just the kind of thing that Irene probably cut her teeth on.

And just as much the kind of misadventure that cut its teeth on her.

Marion Lane, like Miss Brickett’s itself (and Miss Brickett herself, for that matter) is more than she appears to be. Miss Brickett’s (the agency) is the kind of place that feels like it ought to exist, even though it really doesn’t. Both in the sense that it would be marvelous if there were people whose lives were dedicated to resolving issues and solving crimes for anyone who needs help, and it would be marvelous if said secret agency operated in secret tunnels under one of the great cities – like London.

London in particular, is so large, has been a city for so long, and has such a many-layered history that we’re not surprised when real things that have been lost for decades – or centuries – turn up under it. Like lost Underground Stations – something that has really happened.

Miss Brickett’s, both the agency and the person, also intersect with the post-World War II history of women who found important jobs and purpose during the war and just weren’t interested in giving it all up afterwards. Particularly women who served at Bletchley Park as codebreakers.

Come to think of it, Sparks and Bainbridge (The Right Sort of Man, A Royal Affair and the upcoming A Rogue’s Company) would have fit right into Miss Brickett’s – even if they would have chafed at some of its many rules and restrictions.

But there are secrets in and under Miss Brickett’s. Not just the secrets its Inquirers investigate, but the secrets that they are keeping. Including their own. Because Miss Brickett’s conceals some of the very shady parts of Britain’s involvement in the late war. And because it guards the mysterious and deadly “Border” between the worlds we know – and someplace we very much don’t.

So when the “Border Guard” is murdered in a locked room named the “Lock Room” Marion Lane risks her apprenticeship and her life to determine who really done it. Because it couldn’t have been the person who was framed for it.

It’s up to Marion and her friends and frenemies to discover the truth – before that truth discovers that they are out to get it – and definitely before it gets them.

Escape Rating A-: The blurb is a bit misleading. While the murder at the heart of this mystery is a locked-room mystery, the totality of Marion’s story bears no resemblance to anything by Dame Agatha.

Rather, this reads like it sits at the dangerous crossroads between The Invisible Library and the Scholomance of A Deadly Education by Naomi Novik. The dark passages under Miss Brickett’s, the atmosphere of “here be dragons”, complete with monsters that serve as the equivalent of real, honest to goodness dragons, feels very much like the dark, dank and deadly corridors – and especially the lost halls – of the Scholomance.

It’s also clear that survival skills are an unstated but absolutely necessary part of all three curriculums.

While Marion’s misadventures read like some of Irene Winters’ training at the Invisible Library, Marion as a character is very much like El in A Deadly Education. She’s young, she’s still learning, the apprenticeship feels like her last chance to save herself, she’s in over her head and the place and everyone in it really are out to get her.

Not everyone in either case, but that’s how it feels from each of their perspectives at the time the stories open.

Marion’s situation is in many ways more poignant because it is based in the real. She knows that she doesn’t want the life everyone thinks she should want – marriage and children – and she definitely doesn’t want it with anyone that her grandmother picks out for her. She’s desperate to escape her situation and Miss Brickett’s is more than just a job, it’s Marion’s ticket out of her life and into something meaningful, purposeful and marvelous.

She has a lot riding on this apprenticeship – if she can just stick it for the three years required, not merely survive but receive good evaluations,  she’ll be offered a full-time position as an Inquirer – which includes room and board at Miss Brickett’s and away from her harridan of a grandmother.

But, as much as the creepy monsters under the agency, the mysterious “Border” and the hidden laboratories add to the chilling atmosphere of both Miss Brickett’s and the story, it’s the human side of all the equations that compels the reader to explore this world with Marion.

We feel for her personal predicament in the outside world, but it’s her motivations inside Miss Brickett’s that push her to investigate the murder. And it’s those same human motivations that are behind everything; pride, ambition, greed, jealousy and revenge, set against the need to keep the agency’s actions secret at all costs.

And it’s that balance and its breaking, the need to give justice to both the many – the people of London who rely on Miss Brickett’s services – as well as to the few – both the victim of the murder and the man framed for it, set against Miss Brickett’s own need to keep the agency secret so that “Official” London doesn’t shut down its clandestine and frequently illegal operations, that underpins the whole story and provides both its dramatic tension and its relief and release.

Marion and Miss Brickett’s are both fascinating characters. Marion’s career at Miss Brickett’s and her life are both at their starting points. Based on this initial outing, it’s clear that both have many more marvelous stories to tell us.

I hope we get to read them.

Review: The Cabinets of Barnaby Mayne by Elsa Hart
Review: The Armies of Heaven by Jane Kindred

2 thoughts on “Review: Marion Lane and the Midnight Murder by T.A. Willberg”