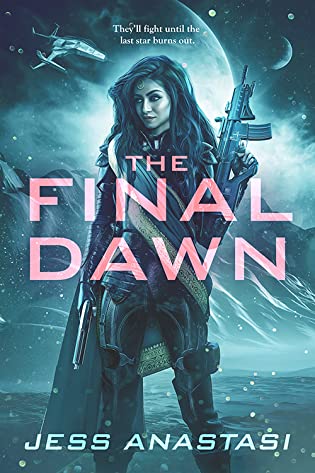 Rian Sherron is a lot of things. Captain of the spaceship Imojenna. Ex-war hero. Ex-assassin. For years, he's traveled from one end of the galaxy to the other, both trying to escape his demons and get revenge on the shape-shifting aliens responsible for his slow demise into hell.
That all changed the day Rian rescued an Arynian priestess from slave traders. Ella Kinton is everything Rian both fears and admires. Ella is everything he never let himself admit he wanted. Together, they must face a harrowing choice—come together and defeat Reidar, or fall apart, leaving the universe in total chaos.

I picked up The Final Dawn because I enjoyed so much of the Atrophy series – to the point where I gave more than one entry in the series an SFR Galaxy Award. 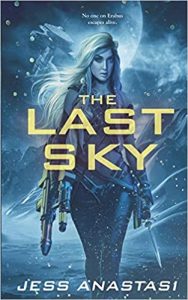 The Atrophy series began as more than a bit of a Firefly-alike, and when it began back in 2015 with Atrophy, later republished as The Last Sky, it filled a Serenity-shaped hole in my heart as it had not been all that long since I finally got around to rewatching the oft-recommended and much-beloved TV series.

The series continued with Quantum in 2016 (now titled The Lost Stars), Diffraction in 2017 (now The Dark Moon) and then Entropy in 2018 (now The Empty Night). And then nothing. It was obvious from the ending of Entropy and there was more to come in the series, but real-life entropy set in and … crickets.

Until now. The Final Dawn is the final book in the series, but it’s been three years since the previous book. Long enough that I’m not entirely certain that the reason this book didn’t feel like it really followed on from the previous is because I’ve forgotten too much or because it doesn’t follow nearly as well or as tightly as the previous books did.

And that matters because the books in this series are not true standalones. The romantic pairing is different in each but everyone stays together to fight the good fight and all of the prior action and worldbuilding gets tied up in this final book in the series.

So this one follows everything that came before, and on top of that felt both rushed and like more than a bit of kitchen sink got thrown in. To reference another late and much-lamented science fiction TV series, it reminded me a bit too much of the way that Babylon 5 nearly ended at the end of season 4, so all the plot threads had to start closing in a hurry, only for there to be a reprieve giving us a season 5 after all, albeit one that had more than a bit of filler because so many plot threads had been closed.

As this series reaches The Final Dawn, the characters are separated, everything spins downward towards the dark, and it all takes on a spiritual/metaphysical direction that just did not feel like it was part of the original action/adventure story that I enjoyed so much.

Escape Rating C: In the end, The Final Dawn was a book that I so very much wanted to love, but just didn’t. And I’m rather sad about that. The first four books in this series were wonderful, the characters were fascinating, the worldbuilding was complex and the overarching story of an underdog crew fighting against an enemy that no one else even believes exists was compelling.

I’m still glad to know how it all ended. Mostly. At least I think I am.