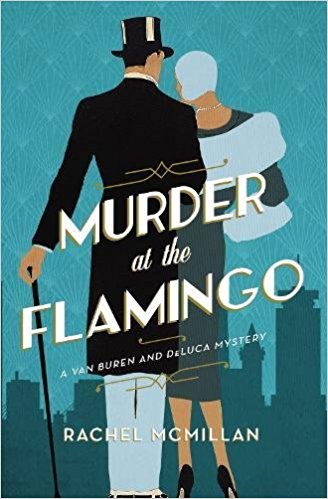 Hamish DeLuca has spent most of his life trying to hide the anxiety that appears at the most inopportune times -- including during his first real court case as a new lawyer. Determined to rise above his father’s expectations, Hamish runs away to Boston where his cousin, Luca Valari, is opening a fashionable nightclub in Scollay Square. When he meets his cousin's “right hand man” Reggie, Hamish wonders if his dreams for a more normal life might be at hand.

Regina “Reggie” Van Buren, heir to a New Haven fortune, has fled fine china, small talk, and the man her parents expect her to marry. Determined to make a life as the self-sufficient city girl she’s seen in her favorite Jean Arthur and Katharine Hepburn pictures, Reggie runs away to Boston, where she finds an easy secretarial job with the suave Luca Valari. But as she and Hamish work together in Luca’s glittering world, they discover a darker side to the smashing Flamingo night club.

When a corpse is discovered at the Flamingo, Reggie and Hamish quickly learn there is a vast chasm between the haves and the have-nots in 1937 Boston—and that there’s an underworld that feeds on them both. As Hamish is forced to choose between his conscience and loyalty to his beloved cousin, the unlikely sleuthing duo work to expose a murder before the darkness destroys everything they’ve worked to build.

This historical mystery begins when two 20-somethings run away from home. Separate homes.

Hamish DeLuca runs away from his home in Toronto, Regina Van Buren runs away from her home in New Haven Connecticut. They both end up in Boston in the midst of the Depression, and they both end up working for, or with, Luca Valari as he performs all the wheeling and dealing necessary to open his high-class nightclub, The Flamingo.

Hamish intended to end up with Luca. Luca is his cousin, his favorite cousin. And the only person who ever seems to have treated Hamish as normal and not as “poor Hamish” afflicted with a nervous disorder. Hamish has severe panic and anxiety attacks. His most recent, or most embarrassing, occured in the middle of a courtroom as he attempted to defend his first client. In the aftermath, he discovered that even the job he thought he’d earned had been given to him as a favor to his father.

Hamish ran off to Luca.

Reggie ran away from her upper crust family and her upper crust boyfriend when said boyfriend decided to announce, in the middle of a huge family party, that he and Reggie were engaged. They weren’t. He hadn’t even asked. The force of the slap she administered could be heard echoing all the way to Boston. Or so it seemed.

She packed a bag and ran away, intending to make a life for herself away from her family’s privilege, money and restrictions. Luca hired her to answer his phone and stave off his creditors, not necessarily in that order, and to provide a touch of class to his new establishment.

Reggie and Hamish find themselves, and each other, working with Luca. But the trail of slimy double-dealings has followed Luca from Chicago to Boston – and it catches up with them all. 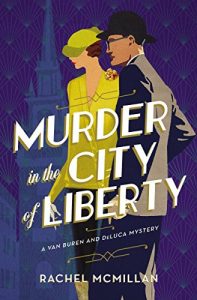 Escape Rating B: This is the first book in an intended series. Book 2, Murder in the City of Liberty, scheduled for publication next spring. As such, it has to carry the weight of all the worldbuilding for the series, and it’s a lot of weight.

The characters of both Hamish and Reggie are interesting, and Reggie in her exploration of Boston’s working class precincts is a lot of fun, but they cut themselves off from their backgrounds, leaving a lot about where they respectively began more than a bit murky.

But not nearly as murky as the character of Luca Valari, around whom so much of the story resolves. Luca seems to be absolutely dripping in charisma, and Hamish certainly hero-worships him. Reggie is grateful for a job opportunity that does not involve being groped and ogled, and is caught up in his spell to some extent, but not in a romantic sense. Still, she’s aware that Luca has something that makes people want to please him.

However, while it is obvious fairly early on that Luca is up to his eyeballs in something at least slightly dirty, neither Hamish nor Reggie are savvy enough to figure out exactly what, or how much, until it is far too late. Unfortunately for the reader, Luca is so good at keeping his secrets that even after all is supposedly revealed, it still feels like some things remain lost in that murk.

This is also a very slow building story. The titular murder does not occur until the mid-point of the story, and it is only then that things begin to move into a higher gear. While the introduction to the characters and their situation is interesting, it takes rather long to get to the meat of the story.

Murder at the Flamingo, as hinted at by its art deco inspired covers, takes place in the late 1930s, post-Prohibition, pre-World War II and in the depths of the Great Depression. This isn’t a period that has been seen a lot previously in historical mystery, so readers may not be as familiar with this setting as, for example, the “Roaring 20s” or the WWII time frame. More grounding in the setting might have been helpful.

If this time period interests you, another historical mystery series set in the 1930s, the Jake and Laura series by Michael Murphy, is worth taking a look at. The first book is The Yankee Club, and it comes at the period from a different perspective as both Jake and Laura, while doing well by the time the story begins, both had a much more hardscrabble upbringing than either Hamish or Reggie.

I liked Hamish and Reggie more than well enough to stick around for their next adventure. I want to see if Quasimodo manages to figure out that he really is Superman, and gets the girl after all.

2 thoughts on “Review: Murder at the Flamingo by Rachel McMillan”