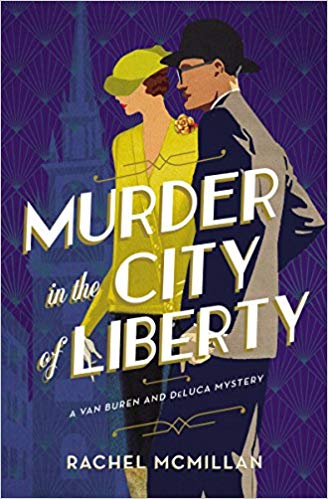 Hamish DeLuca and Regina "Reggie" Van Buren have a new case--and this one brings the war in Europe dangerously close to home.

Determined to make a life for herself, Regina "Reggie" Van Buren bid goodbye to fine china and the man her parents expected her to marry and escaped to Boston. What she never expected to discover was that an unknown talent for sleuthing would develop into a business partnership with the handsome, yet shy, Hamish DeLuca.

Their latest case arrives when Errol Parker, the leading base stealer in the Boston farm leagues, hires Hamish and Reggie to investigate what the Boston police shove off as a series of harmless pranks. Errol believes these are hate crimes linked to the outbreak of war in Europe, and he's afraid for his life. Hamish and Reggie quickly find themselves in the midst of an escalating series of crimes that seem to link Boston to Hamish's hometown of Toronto.

When an act of violence hits too close to home, Hamish is driven to a decision that may sever him from Reggie forever . . . even more than her engagement to wealthy architect Vaughan Vanderlaan.

Luca Valari is still the man of mystery behind the shady goings on in this second book in the Van Buren and DeLuca series. But Reggie Van Buren and Hamish DeLuca are definitely front and center in this atmospheric story of pre-WW2 Boston. 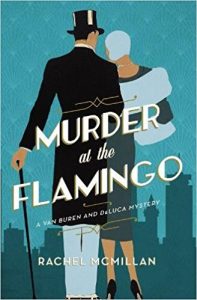 Although, just as in Murder at the Flamingo, it’s almost halfway through the book before the dead body turns up, there’s already plenty of shady goings on.

Nate Reis, Hamish’ roommate and the unofficial Jewish prince of the city’s immigrant North End, is hiding something – not that the increasing amount of Antisemitism and anti-immigrant fury is hiding anything from him.

Hamish and Reggie find themselves in multiple kinds of trouble when they investigate what looks like a potential housing development that plans to create substandard housing on land that is certain to be not merely unsuitable but actually unstable – and not with the consent of the current owner.

The situation gets even dicier when a figure from their past with Luca Valari and his Flamingo Club appears in the shadows – and someone pushes Reggie into the freezing waters of Boston Harbor.

The client they do manage to retain is the Black minor league baseball player Errol Parker, better known as Robin Hood for his base-stealing prowess. Parker has been the victim of an escalating series of so-called pranks, and he wants Van Buren and DeLuca to get to the bottom of it before someone roughs up his 16-year-old nephew. Again.

When the boy turns up dead in the locker room wearing his uncle’s jersey, they are left to investigate whether his murder was due to the color of their client’s skin, the shady people the boy was doing errands for, the rise of racial tension in general – or something else all together.

Escape Rating B: There’s something about this entry in the series that feels much darker than the previous book. Not that there isn’t plenty of mystery in both, but it feels like there were more lighthearted moments in Murder at the Flamingo – at least before said murder – than there are in Murder in the City of Liberty. Or it may be that Reggie Van Buren and Hamish DeLuca were just a lot more naive in the first book than they are, three long years later, in the second.

Some of that is the time period. While Flamingo takes place during the Depression, which was no picnic, this book is set in 1940. By this point in history, World War II had already begun in Europe, Hamish’ home country of Canada was already involved, and people in the U.S. were dealing with the sense that they would be caught up in the war, whether they wanted to be or not, sooner or later. Most likely sooner.

Which doesn’t mean that there weren’t plenty of isolationists doing their level best – or should that be absolute worst – to keep the U.S. out of the war as long as possible. And a lot of their reasoning revolved around their disgusting propaganda campaigns to keep America white and Christian and to denigrate, persecute and even murder anyone who was not. A propaganda campaign – with its associated violence – that has both Hamish and Reggie’s client Errol Parker and their friend Nate Reis squarely in its sights.

The threats hanging over Parker and Nate are part of the darkness that permeates the story, as is shadowy presence of Hamish’ cousin Luca – who is up to his neck in something shady yet again. Someone is following Hamish, but whether it’s Luca’s agents attempting to keep Hamish safe, or Luca’s enemies trying to get at Luca through Hamish is all part of the puzzle. A puzzle that keeps Hamish – and the reader – guessing until the very end. 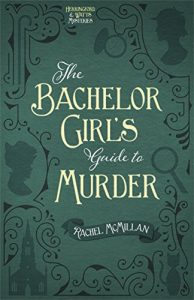 Speaking of that end, at the end of Murder in the City of Liberty Hamish is brought face to face with his parents’ past – a past that has been hidden from him all of his life. However, that past is not hidden from the reader – or at least not the readers of the author’s Herringford and Watts historical mystery series, which features Hamish’s mother and her bestie – and eventually leads to the events which led to the “falling out” between Hamish’ parents and Luca Valari’s.

It seems like everything in Hamish’ life comes back to Luca, one way or another. But the Herringford and Watts series looks scrumptious! So it looks like the first book, The Bachelor Girl’s Guide to Murder, will be going on my TBR pile as something to tide me over until the next installment in the Van Buren and DeLuca mysteries!

2 thoughts on “Review: Murder in the City of Liberty by Rachel McMillan”