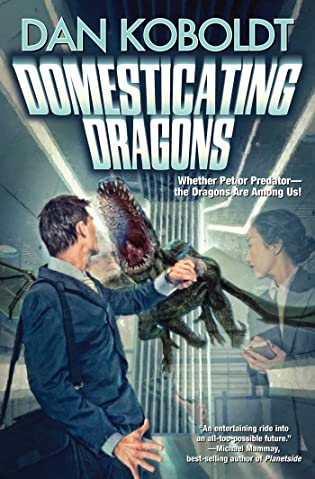 Build-A-Bear workshop meets Jurassic Park when a newly graduated genetic engineer goes to work for a company that aims to produce custom-made dragons.
Noah Parker, a newly minted Ph.D., is thrilled to land a dream job at Reptilian Corp., the hottest tech company in the American Southwest. He’s eager to put his genetic engineering expertise to use designing new lines of Reptilian’s feature product: living, breathing dragons.
Although highly specialized dragons have been used for industrial purposes for years, Reptilian is desperate to crack the general retail market. By creating a dragon that can be the perfect family pet, Reptilian hopes to put a dragon into every home.
While Noah’s research may help Reptilian create truly domesticated dragons, Noah has a secret goal. With his access to the company’s equipment and resources, Noah plans to slip changes into the dragons’ genetic code, bending the company’s products to another purpose entirely.

The blurb calls this “Build-A-Bear workshop meets Jurassic Park” and that does sum up the top level of this story – although in the end it turns out to be WAY MORE Jurassic Park than Build-A-Bear™.

After all, those bears aren’t real, but the dragons in Jurassic Park definitely are. Although the dragons that both do and don’t get domesticated don’t run quite that far amok. But they could. And they definitely do run a bit amok, but then, so do their designers – and their owners.

There are two situations at the beginning of this story, and they play into each other in ways that I didn’t expect at that beginning.

Noah Parker got into genetic engineering because his younger brother has a muscular atrophy-type disease that could be genetic. But nobody knows and with the source of the disease unidentified – and therefore medically “vague” – Connor Parker isn’t eligible for any of the experimental testing and treatment programs that are currently underway – or that ever will be.

Noah became a genetic engineer not so he could cure his brother – because that’s not possible – but so that he could identify the genetic component of his disease and get him into effective treatment.

It’s a noble goal – although the lengths that Noah goes to in order to achieve it are sometimes less than noble.

There’s also a secondary problem that most of the world considers more important than the progress of one man’s disease. A virus has killed off nearly the entire canine population the world over – and no cure has been found.

Strangely enough, that’s what leads to dragons. Because dogs fill a lot of roles in the human ecosystem, as well as making marvelous pets. There’s a huge niche that can be exploited by someone with the genetic engineering knowhow and the economic savvy to design and build a creature that can fill all those cages that used to be filled by barking dogs.

That’s where Reptilian Corporation comes in. And eventually, where it goes out. With more than a bit of help from newly minted Ph.D. Noah Parker and all of his little friends. 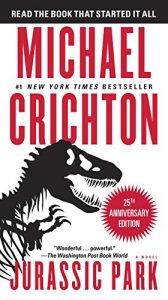 Escape Rating A-: Dragons may be the ultimate in charismatic fauna. They’re certainly right up there with the dinosaurs of Jurassic Park for just how much sheer “grabby hands syndrome” the idea of having one’s very own dragon would create in pretty much anyone.

Including a whole lot of people who are incapable of being responsible pet owners for one reason or another. The transcripts of the calls to the Build-A-Dragon help line and support department are hilarious and so very real. Tech support for computers and computer software sounds very much like that – without the possibilities of death and dismemberment for either the owner or the product. Usually. (If you’ve never read the probably apocryphal tale of nosmoke.exe, now might be the time. We all need a laugh or two this week!)

As much as I chuckled over the tech support bits, this is a story that began by giving me a terrible sad. Imagining a world where there were no dogs was depressing as hell. And I’m a cat person. But seriously, as many jokes as there are about asking the deity to make someone as good of a person as their dog thinks there are, the idea that the dogs were all gone was heartbreaking. Strangely even more heartbreaking than the situation at the beginning of Connie Willis’ quirky time-travel classic, To Say Nothing of the Dog, which begins in a world where it’s the cats who have been killed off.)

It also made me wonder, throughout the story, why no one seemed to have thought about engineering dog species who were immune to the virus. Discovering the reason at the end was kind of a relief.

But the story here is about one extremely nerdy guy who sets out to save his brother and ends up saving an entire species. Because as much as he wants to treat the dragons as if they are merely clusters of experimental cells, he can’t. They worm, or rather fly, their way into Noah’s heart every bit as much as they do the readers’.

So when Noah discovers the truth about what’s really going on with the company and the dragons, we’re right there with him in his horror, his disgust, his fear and his determination. We cheer him on as he does what’s right instead of what’s easy.

And it’s marvelous that in the end, rather like the way that dogs (and cats) save us as much as we save them, Noah’s dragons save him every bit as much as he saves them – if not just a bit more.

Lab-based science fiction, with its grounding in the real world, real situations and people who feel like friends rather than out-of-this-world superheroes is a lot of fun when it’s done right. It’s done right in Domesticating Dragons, with its geeky hero who saves the day, gets the girl and fulfills all of our dreams of dragons.