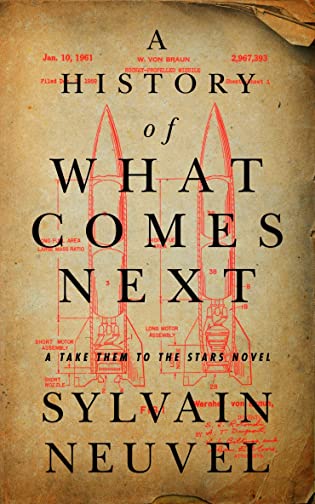 Showing that truth is stranger than fiction, Sylvain Neuvel weaves a scfi thriller reminiscent of Blake Crouch and Andy Weir, blending a fast moving, darkly satirical look at 1940s rocketry with an exploration of the amorality of progress and the nature of violence in A History of What Comes Next.
Always run, never fight. Preserve the knowledge.Survive at all costs.Take them to the stars.
Over 99 identical generations, Mia’s family has shaped human history to push them to the stars, making brutal, wrenching choices and sacrificing countless lives. Her turn comes at the dawn of the age of rocketry. Her mission: to lure Wernher Von Braun away from the Nazi party and into the American rocket program, and secure the future of the space race.
But Mia’s family is not the only group pushing the levers of history: an even more ruthless enemy lurks behind the scenes.
A darkly satirical first contact thriller, as seen through the eyes of the women who make progress possible and the men who are determined to stop them...

When I picked this up I was kind of expecting something like the Lady Astronaut series, an alternate history where women, in spite of the odds and the decks that are stacked against them, manage to participate more fully and much earlier in humankind’s race to get off this planet and into the stars. Maybe crossed with any of several books I’ve read that cover the post-WW2 frenetic scientist-nabbing of Operation Paperclip, books like Miss Graham’s Cold War Cookbook and Moonglow, along with plenty of others.

The story I got wasn’t quite the one I expected. For one thing, the Lady Astronaut series is alternate history, but the story in A History of What Comes Next is really a secret history. It’s not that the world is different, it’s that the world is pretty much the same but there are things happening behind the scenes and under the surface that were brought about by secret groups with hidden motives that, sometimes intentionally and sometimes accidentally, have created the world we know.

The world of the Kibsu and the Rādi Kibsu, the secret groups operating behind the scenes, are a bit like the Templars and the Assassins in the Assassin’s Creed videogame series, two groups trying to manipulate history to further their own ends, which are never half so benign as either group pretends they are – something that is also true in the games.

This story of hidden and secret operations is, at this juncture in its history, crossed with Operation Paperclip, the Space Race BEFORE the Space Race, as Sarah and Mia, the 99th cell of the Kibsu, do their best to further both the US and the Soviet immediate post-WW2 operation to “rescue” and “rehabilitate” as many Nazi rocket scientists as they can manage to get across one border or the other.

Both sides want to build better rockets, in order to have more opportunities to drop bombs on each other from great distances. The Kibsu, hiding in the shadows helping both sides, believe that those rockets are the key to manned space flight, and therefore to the eventual success of their millennia long mission to get humankind to the stars.

In their two-steps-forward-one-step-back progress in that mission, the Kibsu are opposed by their opposite number, the Rādi Kibsu. The ones who track them back and forth across the globe and eliminate them whenever they can. The Rādi Kibsu’s mission is to retrieve a machine that they believe the Kibsu are hiding from them. A machine that will help them fulfill their mission to return to the stars.

But these two sides, these two families, have been crossing the globe and killing each other – along with a whole lot of collateral damage inflicted on both sides – for a mission that neither completely understands.

Even though they both think they’re working for the “Greater Good” – for all of the worst definitions of that terrible phrase.

Escape Rating B: This is not a quick read. I mean that not in the sense that the book is terribly long – because it’s not – but rather that the story starts out slowly and moves forward in fits and starts. Also the way that the story moves forward almost necessitates those fits, as there are three perspectives or three types of narration, depending on how one interprets such things.

The real action parts of the story are from Mia’s first-person perspective. As the story begins, Mia is a child, with all of a child’s selfishness and self-absorption. And she doesn’t really grow out of that perspective until the very end when she’s forced to take the parental role.

Then there are not one but two types of interstices. In between Mia actually doing what her mother believes is necessary, there are sections of the story that consist of conversations between Mia and her mother Sarah. Conversations where the two women often talk past one another because of conflicts both internal and external.

And there are sections, Entr’actes as the book labels them, written in the third-person omniscient as the reader gets glimpses of the Kibsu through history – often through real history that’s attributed to them in the story. Real history that feels meticulously researched and functions a bit like “Easter eggs” for history nerds.

The three perspectives don’t quite gel – or alternatively they are gelid to the point of stickiness. Your mileage will probably vary. I loved the history bits, but not everyone does or will. 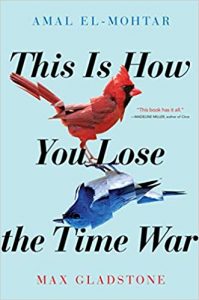 In the end, the book that I was most reminded of was This is How You Lose the Time War. A story that also left me a bit conflicted in the same way that this one does.

The reason that’s the part this is sticking has to do with the revelations about the origins and role of the Rādi Kibsu. We begin the story kind of on the side of the Kibsu. They seem to be working for the betterment of humanity even if their methods of doing so are very messy and have an extremely high body count. They don’t want to kill people, but sometimes, at least from their perspective, it just has to be done.

Their goal is a lofty one, to get humanity off this ball of rock and into the stars before we’re wiped out. They are scientists and they’re following the science as best they can.

But, but, but, the rules they follow are rigid, the price they personally pay is high and they are always on the run from the Rādi Kibsu, the men they call the Trackers.

Because that’s a part of it too. The Kibsu are always women, and each daughter appears to be a clone of her mother. The Rādi Kibsu are always men, and each generation appears to be the clone of the one before it. That the Rādi Kibsu have become entirely too fond of violence for its own sake helps to make them less than sympathetic, not just to the Kibsu, but to the reader as well.

Each of them thinks that the other is evil. And they are continuing their race, against time and each other, in the hopes that one side or the other can make it stop. But they can’t. Or won’t.

It’s the eternal nature of their race, that they each hold pieces of the puzzle but can’t put them together, that they each think their side is righteous and the way that they are both working towards an ultimately nebulous goal that made the whole thing echo This is How You Lose the Time War.

Because the race between the Kibsu and the Rādi Kibsu is definitely how they are BOTH losing the damn time war. Over and over and over again. And quite possibly the war to take humanity to the stars along with it. 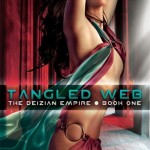 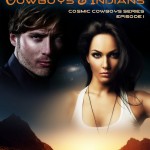 Review: And They Called It Camelot by Stephanie Marie Thornton

2 thoughts on “Review: A History of What Comes Next by Sylvain Neuvel”