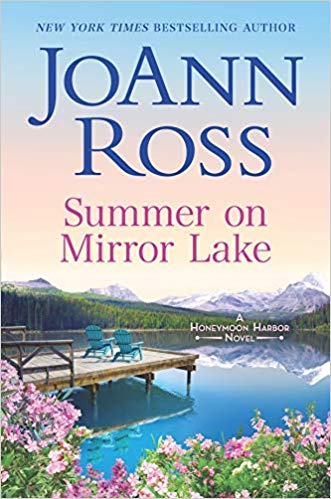 When he lands in the emergency room after collapsing at the funeral of a colleague and friend, Wall Street hotshot Gabriel Mannion initially rejects the diagnosis of an anxiety attack. But when warned that if he doesn’t change his adrenaline-fueled, workaholic lifestyle he could end up like his friend, Gabe reluctantly returns to his hometown of Honeymoon Harbor to regroup.

As he adjusts to the sight of mountains instead of skyscrapers, Gabe discovers advantages to this small Pacific Northwest town he once couldn’t wait to escape. But it’s irresistible librarian Chelsea Prescott who, along with the two foster children she’s taken under her wing, makes slowing down seem like the best prescription ever.

Over the course of their summer romance, Gabe gets a taste of the life he might have had if he’d taken a different path. But with his return to New York City looming on the horizon, he’ll have to choose between the success he’s worked tirelessly for and a ready-made family who offers a very different, richly rewarding future…if he’ll only take the risk.

When is a fling not a fling? Possibly when it comes with two children and a boat. But definitely when it begins with thinking you’re having a heart attack. While serving as a pallbearer at the funeral of someone you looked upon as a mentor.

For Gabe Mannion, wanting to be just like his mentor Carter Kensington has taken on a whole new meaning. The man is dead at 46, his heart a victim of the adrenaline rush that is high-level high-stakes trading on Wall Street.

Gabe’s panic-attack-that-feels-like-a-heart-attack is a giant wake up call. As one of his brothers later informs him, if your job gives you panic attacks, you’re doing it wrong. The problem for Gabe is that he doesn’t know how to stop doing it.

So he goes home. In that sense that home is the place that when you go there, they have to take you in. Gabe needs to take the summer off and get away from his high-stakes, high-stress, all work and no life life-style, so he takes himself back home to Honeymoon Harbor, the tiny little beach town in the Pacific Northwest that he left for the fast track more than a decade ago.

He’s achieved the wealth that he dreamed of, not because he was greedy, but because money is a way of keeping score. He’s just never figured out when enough is enough, and adrenaline is just as addictive as any other drug.

He thinks he’ll be home for the summer, find a bit of zen, whatever that might mean, or at least ease off on the stress, and then return to the high-pressure world of dollars and cents – and more and more dollars.

Instead, librarian Chelsea Prescott rows over to the beach log mansion (it really is) he’s staying in for the summer, and invades his life, his house, the boat he’s building, and even, just possibly, his heart.

But their summer fling is supposed to have a limited shelf life. Her life, her home, and her life’s work is in Honeymoon Harbor, and he’s going back to New York after Labor Day. Or is he?

Escape Rating B+: This is a sweet little feel-good story about two people who have seen a few too many of life’s bumps and hard knocks, but have come out all the stronger for it.

I’m not actually talking about Chelsea and Gabe. I’m talking about Chelsea and Hannah, the young girl that Chelsea first takes an interest in when she notices that Hannah and her little sister Hailey are spending every afternoon in Chelsea’s library. Once upon a time, Chelsea spent her after school afternoons in that very same library, when her family and her home life was falling completely apart.

Chelsea sees herself in Hannah, using the library as a refuge and taking the very best care she can of her little sister. In Chelsea’s time, the librarian took her under her wing, giving her a refuge, a mentor, and eventually a career that she loves. Now it’s Chelsea’s turn to pay that gift forward.

But the package gets bigger when Hannah and Hailey’s foster mother goes AWOL and the girls need a place to stay. Chelsea steps up, and Gabe, steps up with her. Their fling has just barely begun, and suddenly they are all in together, making a home for two girls who need more than a temporary safe landing. They need a forever home, and Chelsea plans to give it to them.

With or without Gabe. But better with. If he can get his head out of his ass to figure where his heart is. Because Chelsea has already found hers.

Chelsea and Gabe’s relationship is fun to watch, but it’s Chelsea’s burgeoning relationship with the girls that really drives the book. There’s something very right about the family that they build together, a family that they all want Gabe to be a part of if he is willing to take a good hard look at the life he had in New York, the life he has in Honeymoon Harbor, and who the heck he wants to be when he finally grows up. Because when the story begins, he surely hasn’t.

Chelsea, on the other hand, begins the story grown up but closed off. Her childhood trauma has left her with the same need to guard her heart that she sees in Hannah. The way that the woman and the girl grow towards each other, and open their hearts in the process, is lovely to watch.

They are going to get the family they deserve, together, whether Gabe sticks around or not. That he does finally figure it out makes for delicious icing on a very yummy story.

I’m giving away a copy of Summer on Mirror Lake to one lucky US or Canadian commenter on this tour!