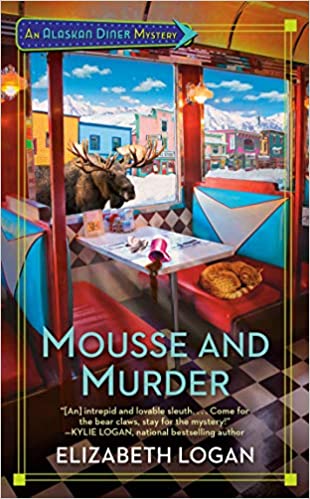 A young chef might bite off more than she can chew when she returns to her Alaskan hometown to take over her parents' diner in this charming first installment in a new cozy mystery series set in an Alaskan tourist town.

When Chef Charlie Cooke is offered the chance to leave San Francisco and return home to Elkview, Alaska, to take over her mother's diner, she doesn't even consider saying no. After all--her love life has recently become a Love Life Crumble, and a chance to reconnect with her roots may be just what she needs.

Determined to bring fresh life and flavors to the Bear Claw Diner, Charlie starts planning changes to the menu, which has grown stale over the years. But her plans are fried when her head cook Oliver turns up dead after a bitter and public fight over Charlie's ideas--leaving Charlie as the only suspect in the case.

With her career, freedom, and life all on thin ice, Charlie must find out who the real killer is, before it's too late.

It is more likely that the Elkview Bugle would win a Pulitzer – after all, the Anchorage Daily News just did – than it is that Charlene Cooke attended her first – and only – year of law school in Anchorage. There are no law schools in Anchorage or anywhere in Alaska.

Not that Elkview actually exists, but there are places just like it along the Glenn Highway. And in spite of some small but mostly necessary changes (I’m still niggled about the law school thing), the Alaska of Mousse and Murder reads like the place I lived in – in all of its cold, wintry “glory”.

But it was great to be back in the “Great State”, even vicariously, for a few hours, to meet the residents of Elkview and solve a perplexing mystery.

The mystery is plenty perplexing, and the red herrings it offers up are as tasty as the offerings at the Bear Claw Diner. Or perhaps that should be the other way around.

Our primary amateur detective in this one is chef and diner owner/operator Charlene Cooke. The Bear Claw is the diner that her mother owned and operated while Charlie was growing up. Charlie herself was practically raised at the counter. Now that Charlie is an accredited chef, her mother can leave the diner in Charlie’s capable hands while traveling “Outside” (that’s Alaskan for anyplace away from the state) with Charlie’s dad.

Charlie’s hands don’t feel all that capable when she and her head chef have one of their epic arguments in the middle of the diner, resulting in Chef Oliver stomping out in a huff. A fact that Charlie doesn’t reveal to her mother in their daily phone call, as mom is half a world away on a Danube cruise and Charlie doesn’t want to spoil it for her.

When Oliver turns up dead, and Charlie is briefly considered a suspect, ruining mom’s vacation is the farthest thing from anyone’s mind. Considering the state of bush policing in Alaska (the statistics Charlie cites are all too real) clearing her name and figuring out exactly who did kill Oliver – and why – shoots right to the top of Charlie’s to do list.

Charlie is determined to leave no stone unturned, and with the help of local reporter and fellow informally sworn-in deputy Chris, she uncovers a web of secrets that shows that absolutely no one really knew Oliver in spite of his decades-long tenure at the Bear Claw.

And that Oliver’s secretive past – and present – provide plenty of motives for his murder.

Escape Rating B+: If you enjoy quirky small-town mysteries, and/or mysteries featuring felines as companion animals, sounding boards and occasional sleuthing assistants, Mousse and Murder is an absolute delight. Oops, I forgot to tell you about Benny.

Benny is the feline who holds Charlie’s heart. He’s a big, fluffy orange cat whose full name is Eggs Benedict. He’s smart enough to answer to either name. He is also clearly the light of Charlie’s life, and he’s adorable. The cat he resembles most closely is Diesel in the Cat in the Stacks series, although he’s not nearly as large. Few domestic cats are.

But Diesel and Benny are both friends and companions for their humans who are the actual amateur sleuths. They are both intelligent, but on the cat scale of intelligence. (As much as I love Joe Grey, one clowder of speaking cats solving crimes is probably enough.) Part of the delight of this story is the way that Charlie loves and cares for Benny, and how much fun they have together. Benny serves as Charlie’s comforter-in-chief and best sounding board. One of the marvelous things about companion animals is that we can tell them anything and they never judge – while humans, of course, pretty much always do.

Mousse and Murder also has shades – or should that be flavors and aromas? – of Diane Mott Davidson and other wonderful culinary mysteries, including a couple of yummy looking recipes tucked into the back. In between investigations, Charlie spends plenty of time at the diner, providing readers with plenty of virtual goodies to salivate over. Remember, there are no calories in the desserts that you only read about – but you’ll be tempted to make some of these!

One of the things that is so fascinating about Alaska is that it is one of the few places where a person can still completely hide in plain sight. In our 24/7 connected world there are very few places where a person can still be part of a community AND be relatively isolated at the same time. That Oliver came to Elkview to live and work in a place where he can both be known and keep his secrets is still possible – and would have been even more so when Oliver started working at the Bear Claw when Charlie was a little girl.

What makes the story so much fun is the cast of characters who frequent the Bear Claw, both the residents of Elkview and the frequent regulars, like the truckers Manny, Moe and Joe, who stop by so often that they have their own booth. I have a feeling we’ll be meeting more of the regulars as the series continues. Based on the ones we’ve met so far, it’s going to be fun getting to know them. 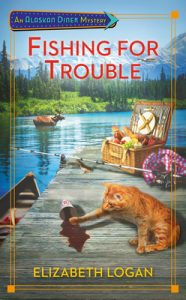 But this first story is all wrapped around Charlie. Hers is the perspective we follow, and she’s an interesting and likeable protagonist, and not just because of Benny. She’s easy to relate to, her fears and insecurities make sense under the circumstances, her mistakes feel real and we want her to succeed.

We also want her to succeed in her potential romance with reporter Chris, but not too soon!

Mousse and Murder is a fun cozy mystery in an unusual setting with a great cast of characters. I did figure who probably “dunnit” fairly early on, but the why was not remotely apparent until very near the end, so that’s also a win.

I’m looking forward to more of Charlie’s adventures, and another visit to Elkview, when Charlie and Benny go Fishing for Trouble later this year.

7 thoughts on “Review: Mousse and Murder by Elizabeth Logan + Giveaway”