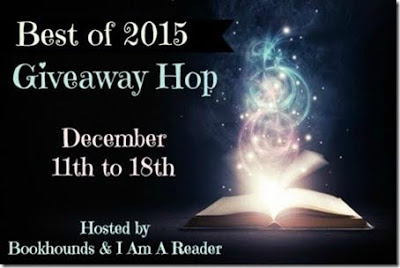 Welcome to the Best of 2015 Giveaway Hop, Hosted by Bookhounds and I Am A Reader.

Usually I just give a Gift Card, but the instructions for this hop are to share our “best of 2015” lists and give away a real book. Or a real ebook. They’re all real to me.

One tiny problem. I have yet to whittle my “Best of 2015” list down to a remotely manageable number. The year isn’t over yet! But seriously, my inability to decide just makes for a longer list of possible “best of 2015” books for the winner to choose from.

The winner of my stop on the hop gets their choice of one of the following books:

Grant Park by Leonard Pitts Jr.
Shakespeare’s Rebel by C.C. Humphreys
Ancillary Mercy by Ann Leckie
An Ancient Peace by Tanya Huff
Freedom of Speech by David K. Shipler
Jade Dragon Mountain by Elsa Hart
Rebel Queen by Michelle Moran
The Aeronaut’s Windlass by Jim Butcher
The Nature of the Beast by Louise Penny
A Pattern of Lies by Charles Todd
Fearless by Elliott James
Liesmith/Stormbringer by Alis Franklin
Flask of the Drunken Master by Susan Spann
The Terrans by Jean Johnson
Last First Snow by Max Gladstone
Rock with Wings by Anne Hillerman
The Clockwork Dagger/The Clockwork Crown by Beth Cato
The Talon of the Hawk by Jeffe Kennedy
Dead Wake by Erik Larson
Pleasantville by Attica Locke
Speak Now by Kenji Yoshino
The Bookseller by Cynthia Swanson
A Key, an Egg, an Unfortunate Remark by Harry Connolly
Shadow Ritual by Eric Giacometti and Jacques Ravenne
A Touch of Stardust by Kate Alcott
Sorcerer to the Crown by Zen Cho
Shards of Hope by Nalini Singh
Uprooted by Naomi Novik
The Shattered Court by M.J. Scott
The Mechanical by Ian Tregellis
Secret Sisters by Jayne Ann Krentz

The links above are to my reviews, so you can get an idea of just why I loved these books so much.

The winner chooses their favorite, and I’ll get it sent to them. For those not in the U.S. the only requirement is to be in a place where Book Depository ships.

a Rafflecopter giveaway
And for more fantastic lists of great books, and the opportunity to win some of them, be sure to check out the other stops on the hop! <!– end LinkyTools script –>