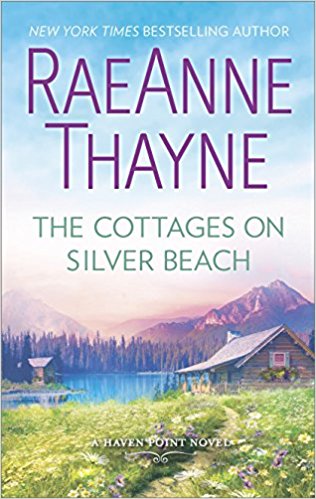 Years after betraying her, he’s back in Haven Point…and ready to learn the truth.

Megan Hamilton never really liked Elliot Bailey. He turned his back on her family when they needed him the most and it almost tore them all apart. So she’s shocked when Elliot arrives at her family’s inn, needing a place to stay and asking questions that dredge up the past. Megan will rent him a cottage, but that’s where it ends—no matter how gorgeous Elliot has become.

Coming back home to Haven Point was the last thing bestselling writer Elliot Bailey thought he’d ever do. But the book he’s writing now is his most personal one yet and it’s drawn him back to the woman he can’t get out of his mind. Seeing Megan again is harder than he expected and it brings up feelings he’d thought were long buried. Could this be his chance to win over his first love?

First of all, the story bears almost no resemblance to the blurb. That doesn’t mean it isn’t a good story or a lovely romance, because it’s both. But the story as written is only tangentially similar to the blurb.

The romance is between Megan Hamilton and Elliot Bailey. And he does come to stay at her family’s inn. But does the story ever diverge from those points!

Once upon a time, Megan Hamilton was dating Elliot’s younger brother Wayne. We’ve met the rest of the Bailey family in the course of the Haven Point series. But Megan and Wayne’s romance never went anywhere because Wayne was killed while helping a stranded motorist during a blizzard.

So she never officially became part of the Bailey family, but in tiny Haven Point, where everyone’s lives are intertwined, the Hamiltons and the Baileys have remained close. Then again, pretty much everyone in Haven Point is close.

Megan and Elliot also remember each other from growing up in Haven Point. Megan and her friends called Elliot, Mr. Roboto. The name was not intended to flatter. Elliot was a bit older, very, very serious, and did everything by the book.

Those tendencies have made him an absolutely stellar FBI agent. But are a bit ironic for the other side of Elliot’s life, because he is also a best-selling true-crime author. And he seems to invest all of his caring and understanding into his books.

Megan is even a fan of his writing – in spite of the fact that she never believed that Elliot thought she was good enough for his brother. And particularly in spite of the fact that when her brother’s wife disappeared 7 years ago, leaving him to raise their two children, Elliot was one of many people in Haven Point who believed that Luke Hamilton had murdered his wife and hidden her body.

When Elliot returns to Haven Point, he’s on leave from the FBI. He disobeyed orders, got himself shot, killed an informant, messed up a DEA case and is now on suspension while he heals from the bullet wound.

He’s also working on his next book. And he’s booked himself into Megan’s inn to work on it. He’s not quite willing to admit to himself that he’s staying at the inn in the hopes of running into Megan – and he’s surprised to discover that she’s living in the cabin next to his.

And that the undercurrents between them are as strong as ever – in spite of all the skeletons in their respective closets.. The question is whether they can lay those bones to rest, or whether the past will continue to stand between them and the future they might have – together.

Escape Rating B+: The Cottages on Silver Beach feels like its about two things. One is trust, and the other is about just how much the baggage of the past holds you back from your brightest future.

The baggage that both Megan and Elliot carry from their birth families is pretty heavy. Megan’s father was both physically and emotionally abusive. While he reserved his physical abuse for his wife, he doled out the emotional abuse to everyone in the house. All Megan ever heard from her dad was that she was plain, dumb and useless. The bastard is long dead, and good riddance to bad rubbish, but she still hears his voice in her head whenever she steps outside her comfort zone.

And it’s that disparaging voice that has kept her from realizing her dream of being an art photographer. She has the skill, but lacks the confidence to put her work out there.

Elliot, on the other hand, is hyper-responsible. In a big family of drama kings and queens, Elliot was expected to take care of everyone and everything – and he’s internalized that message to the point where he suppresses his own emotions and personality.

They can help each other get past their fears, but only if they can get rid of the elephant-sized baggage that’s always in the room with them. Seven years ago Megan’s sister-in-law disappeared after a fight with her husband, Megan’s brother Luke. Neither she nor her body were ever found, and there are many in town who believe that Luke got away with murder.

As a law enforcement officer, Elliot feels duty-bound to admit that it is entirely possible that Luke killed his wife. He may not want to believe it, but it is possible as far as the evidence shows. Megan believes in her brother unconditionally, and as long as they are on opposite sides of this fence, they have no future. Even though they can’t seem to trust themselves when they’re together, as long as Elliot has even a glimmer of an idea that Luke might be guilty, Megan can’t trust him with her heart.

But resolving the issue may reveal Luke’s guilt. Or it may reveal that the previous police chief, Elliot’s late father, mishandled his last big case. That’s a lot of real, painful stuff to get in the way of a romance.

It’s up to Elliot to find a way for all of them to move forward, not just his romance with Megan, but his former friendship with Luke, closure for Luke’s kids, and finally removing the dark cloud over the town. If he can. If he should.

In the end, it’s that dilemma that drives the story much more than the romance. And it felt right.

I am giving away a copy of The Cottages on Silver Beach to one lucky US commenter on this tour!

Review: The Newcomer by Robyn Carr

9 thoughts on “Review: The Cottages on Silver Beach by RaeAnne Thayne + Giveaway”